Helping the average high school student get a college education is the key to filling future jobs and making the nation more globally competitive, Wright State University President David R. Hopkins said in his annual Report to the Community near the Lake Campus.

He said that by 2020 there will be 55 million available jobs in the United States. He said Ohio will have a projected 1 million jobs that potential workers won’t be prepared to fill.

Hopkins said that in the next decade 65 percent of the jobs in Ohio will require some college education. 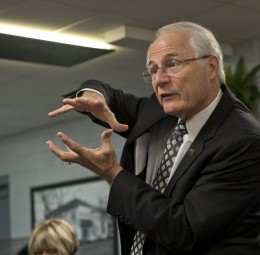 “We must find a way to get more people to the finish line of a college education,” Wright State President David R. Hopkins said during his Report to the Community.

Bonnie Mathies, dean of the Lake Campus, said there are currently between 1,100 and 1,200 students at the campus. She said that in the fall a four-year business degree will be added to the eight bachelor degrees currently offered. More than 125 students have been admitted, or intend to enter, the business program.

Mathies also said there are more than 120 students in the mechanical engineering program as it finishes its third year and that 30 new students are expected to enter in the fall.

This fall, some medical students from Wright State’s Boonshoft School of Medicine will begin residency rotations at the hospital. In effort to address an expected shortage of physicians in rural areas, officials believe that students who go through residencies may choose to stay and open practices after they get their medical degrees.

“The idea of that is if we can get them up here then maybe we can help them want to be here,” Hopkins told the St. Marys Rotary Club.