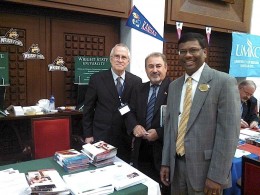 It wasn’t your typical college fair. The venue was war-scarred Baghdad and the Al Rasheed Hotel, desolate as a moonscape and bristling with armed sentries and concertina wire.

And Wright State was there.

As a result, the university expects to have at least four new Iraqi students on campus for Summer Semester and at least 20 in the fall.

“Iraq has a lot of young people that the government wants to educate so they can help rebuild the country,” said Stephen Foster, associate vice president for international affairs who made the Baghdad trip. “When you think of the economic impact the students will have here, what they’re bringing here culturally and what we’re able to contribute in helping rebuild their country, it’s really pretty exciting.”

It wasn’t exactly like setting up shop in the Student Union.

When the trio arrived at the airport in Baghdad, armed security officials ushered them into a van with curtained windows. The delegation was driven into the city’s International Zone, which is largely vacant except for patrol stations manned by the Iraqi military.

“It was sort of like a zombie movie,” Foster said. “You’re driving through these streets and by these buildings, and nobody’s there.”

The trio stayed in the Al Rasheed, an 18-story structure that gained international fame during the 1991 Persian Gulf War when CNN conducted its newscasts from the hotel.

During the five days the group was in Iraq, there were suicide bombings and car bombings every day.

When Wright State and other university officials were bused to a reception at the American Embassy, they passed through “security like you’ve never seen,” Foster said. In contrast to the rest of the International Zone, there was no evidence of bombs or mortars ever having breached the embassy.

The Wright State group worked with officials from the State Department and Iraq’s Ministry of Education to prepare for the fair. About 50 universities took part, 30 of them from the United States, including the University of Wisconsin, Minnesota, Ball State and others.

The Iraqi government has created a scholarship fund that fully pays the cost of its students to attend U.S. and other universities. The scholarships are targeted mainly for Ph.D. and master’s students in the STEM disciplines.

However, Iraqi master’s students can attend Wright State for up to three years and Ph.D. students for up to five. And the students will study in several different colleges.

“A lot of them are coming into engineering, but we have students who are interested in mathematics, statistics, biology, chemistry and some areas in the College of Liberal Arts,” Foster said. “It’s an opportunity to move international students into many of our programs.”

Many of the Iraqi students will bring spouses and children who also receive Iraqi government funding.

In recent years, Wright State officials have made annual recruiting visits to the cultural missions of Middle Eastern countries, spurring an explosive growth of their students attending the university. There are currently about 800.

“The Iraqi relationship started the same way as the relationship to Saudi Arabia and UAE, by visiting their cultural mission and introducing Wright State to them and by making them aware of our programs and of our willingness to serve their students,” said Claudia Espinosa, director of international student recruitment and strategic international initiatives for the Wright State International Gateway.

The Wright State delegation returned to Iraq in April to attend a college fair in Kurdistan, a region in the rugged northern part of the country.

Foster said the Iraqi university officials were impressive. He met one official with three doctorates who was fluent in seven languages.

“I have huge admiration for these senior people who could probably be anywhere in the world with the kind of credentials they have, sitting at a fancy desk drawing great big salaries,” said Foster. “But they are in Iraq trying to rebuild their country and get their people educated.”