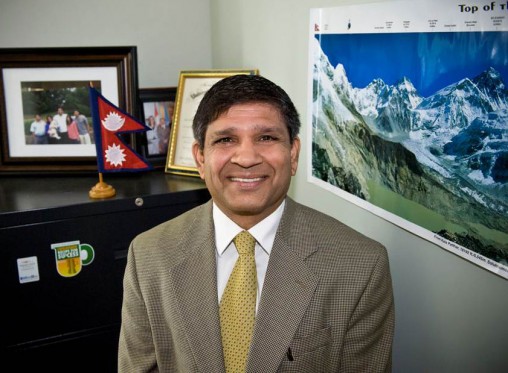 Wright State political science professor Pramod Kantha is researching the transition from a monarchy to a democratic republic in his native Nepal.

Nepal is known for its Himalayas — home to Mount Everest and eight of the world’s 10 tallest mountains. But the tiny Asian nation of 27 million people is also becoming a strategic jewel, snugged between the rising powers of India and China.

And for the past few years, Nepal has been wobbling from a long-time monarchy into a democratic republic, trying to navigate a process that will result in a new constitution.

Pramod Kantha, Ph.D., associate professor of political science at Wright State University, just returned from a trip to his native Nepal to meet with parliamentarians, academics and citizens and take the country’s political pulse.

Kantha said he has learned that efforts to write a new constitution are essentially deadlocked because of the division over whether to give Nepal a strong federal government or a strong state system.

“The answers were not very encouraging,” he said. “There are so many conflicting interests that are trying to push their agenda.”

Kantha’s recent trip to Nepal — his third — is part of his project to write a book about Nepal’s political transition. He also plans to use the information he dug up in papers, talks and lectures to his students.

He has had a front-row seat to political developments in Nepal over the years. He grew up in Birgunj, Nepal, near the Indian border and actually attended high school in India. He was struck by the contrast of the two country’s political systems — the freedoms afforded by India’s democracy and the restrictions imposed by Nepal’s monarchy.

He became interested in political science, absorbing news accounts by the BBC and in The Times of India, The Economist, Newsweek and Time. He later obtained his bachelor’s and master’s degrees in political science in Nepal and in the late 1970s took part in college demonstrations against the monarchy system.

After a 10-year civil war involving the Maoist party, elections in 2008 abolished Nepal’s monarchy and established a federal multiparty representative democratic republic. Since then, there have been efforts to write a constitution that will dictate the political future of Nepal.

In 2010, Kantha wrote a chapter on Nepal’s peace process in the book “The Maoist Insurgency in Nepal.”

Kantha said that despite all the political chaos, Nepal continues to move toward democratization. His research and fact-finding trips look at how forces are able to sustain the democratic process in a relatively undeveloped country.

During his latest visit to Nepal, Kantha also met with officials from educational institutions in an effort to recruit Nepalese students to Wright State. The university currently only has a handful of Nepalese students, but its overall international student population is booming.

“When Nepalese officials look at the university profile here, they are really fascinated,” Kantha said. “It’s just that they didn’t know about it.”