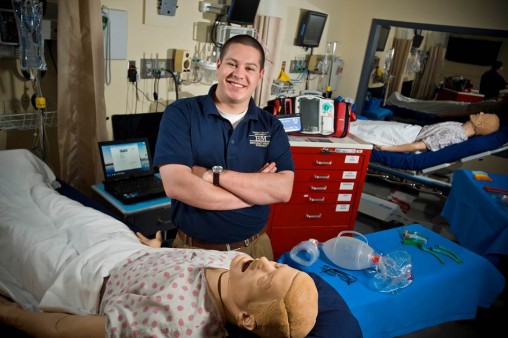 Ben Clouse, who works in the Department of Emergency Medicine, was named Wright State’s 2014 Student Employee of the Year.

End of a long day. Lounging in the living room with the dog. Watching television. Ben Clouse is just trying to relax.

Clouse had befriended the couple shortly after buying a house in Belmont, a Dayton neighborhood. He fixed up the home and was living there with some fellow Wright State University students.

He first met Bob and Teresa when he offered to cut the couple’s grass in exchange for use of their lawnmower to cut his own. The three became friends. There were dinners, long talks. They soon became part of each other’s lives.

For Clouse, the relationship reminded him of times back home in Alvada, Ohio, a tiny rural village 15 miles east of Findlay. One post office. Close-knit families. No one was a stranger.

Clouse’s father was a factory worker at Whirlpool Corporation in Findlay and a part-time farmer. For Clouse and his three younger siblings, it was mostly an agricultural life. There were fields to plow, cattle to tend. One summer Clouse worked at the Bridgestone APM plant in Upper Sandusky, where he carried, stacked and packed a variety of automotive parts in sweltering, furnace-like conditions. 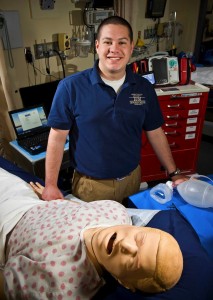 Ben Clouse works in the Boonshoft School of Medicine’s Department of Emergency Medicine and hopes one day to become an emergency medicine physician.

By the time Clouse graduated from New Riegel High School—where he carried a 4.0 GPA and was the class valedictorian—the backbreaking farm and factory work had made it clear to him that college offered the opportunity for a better life.

Going to the University of Chicago was his dream. But even though scholarship offers would have cut the cost in half, Clouse and his family still couldn’t afford it. So Clouse paid visits to The Ohio State University, Case Western Reserve and Wright State, a school that meets its students where they are financially and experientially to get them to the finish line.

“I fell in love when I came to Wright State,” recalled Clouse, a first-generation college student. “Meeting the people at campus visits and orientation, they were just phenomenal. If anything, I came here because of the people.”

Clouse’s dream is to go to medical school. He started out as a biology major, then switched to economics, thinking business would offer a good career backup in case his aspirations to be an emergency medicine physician fall short after he graduates in 2016. He carries a 3.9 GPA.

In January 2013, Clouse began working as an office assistant in the Boonshoft School of Medicine’s Department of Emergency Medicine. Besides clerical duties, he would prep medical simulation mannequins to help medical residents learn how to diagnose and treat real patients.

Clouse quickly became known as not only dependable, but instrumental to the day-to-day operations of the department. He developed a reputation as a “Radar,” the character in the M*A*S*H television series who inexplicably knew what officers needed before they themselves did.

“You know you have an exceptional employee when they foresee your needs before you ask,” said Administrator Alaine Dunn. “I have never known a student with such initiative.”

Clouse’s work at the Department of Emergency Medicine won him the Wright State University 2014 Student Employee of the Year. And along the way, he picked up some practical skills—like becoming certified in cardiopulmonary resuscitation.

And as his frantic next-door neighbor Teresa pounded on his door to help with her stricken husband that fateful day, Clouse thought about his CPR skills—and he began to have doubts. As Teresa led him into her house, he kept telling her that he wasn’t a doctor, that he just worked at the medical school.

“But once we got into that bedroom, I felt an overwhelming sense to act. I could feel my adrenaline pumping. It was then my training took over and was instinctive. I checked my patient’s pulse and found none. Immediately I started CPR and continued until paramedics arrived,” Clouse said. “That was the moment when I really knew that, ‘Yes, I’m doing medicine. This is right for me.’”

Bob survived. And when Clouse sees the couple on their evening walks, they smile and wave.

“Every night that is a reminder that I did something good,” Clouse said. “I want to do this for the rest of my life.”