When he is not jumping out of planes, Army ROTC cadet Evan Fleming is preparing for a career in electrical engineering 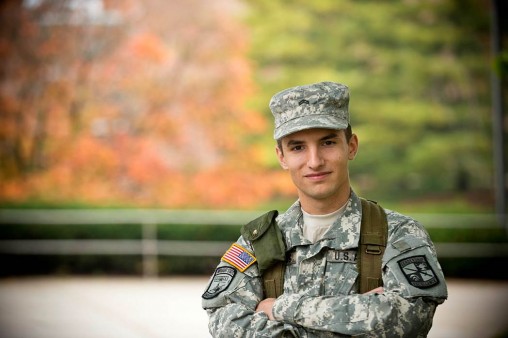 An historian. That’s what Evan Fleming wanted to be. Until he was introduced to the Science Olympiad in high school.

Today, the Wright State junior is on track for a career in electrical engineering.

“Science and the things that scientists can end up doing with their majors and careers really interested me, and I thought I could make more of a difference in the world,” said Fleming.

However, before embarking on an engineering career, Fleming has something else in mind—the military.

At Northmont High School he joined the Naval Junior ROTC, and at Wright State he is a member of the Army ROTC.

“Being in Army ROTC makes it a little different because we’re also by Wright-Patt Air Force Base,” Fleming said. “People around here have a little more indoctrination with the military in the first place. So we end up being more than just another piece of the campus.”

Fleming spent three weeks in airborne school at Fort Benning, Ga., last summer and wants to be an airborne trooper.

“You’re sitting on the plane knowing the only way out is through the back door,” he said. “You’re scared to death, but as soon as you jump out, it’s one of the best experiences of your life.”

Fleming is currently in Spanish Airborne School at a base near Madrid. He was one of only 18 cadets in the United States selected for the program, which gives cadets an opportunity to train with the Spanish army and jump with the Spanish airborne.

Fleming said Army ROTC has made him more confident and disciplined.

“It’s helped me be a better college student by helping with my time management,” he said. “Instead of trying to do everything at the last second, I’m planning the week out . . . which relieves a lot of stress in the end.”

He said it also gives him the courage to approach professors for help instead of sitting back in class and telling himself that he will figure it out later.

After he gets out of the military, Fleming hopes to focus on robotics.

“A lot of careers seem to be opening up in the robotics field, whether it’s in robotics for manufacturing or in medicine,” he said. “It just seemed like there were an infinite number of choices that could interest anybody.”