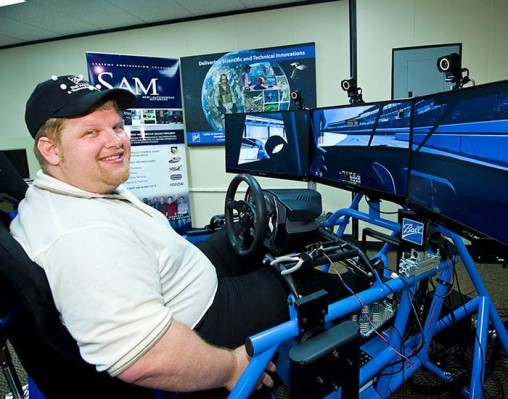 Wright State graduate Benjamin Ausdenmoore played a key role in outfitting a simulator that allows a disabled person to drive.

It was a magic carpet ride. And it happened in a pioneering racing simulator on the third floor of a Ball Aerospace building next to Wright State University.

Fourteen years ago, Indy Racing League driver Sam Schmidt was rendered a quadriplegic after crashing at Walt Disney World Speedway while preparing for the 2000 season.

So when Schmidt arrived at Ball Aerospace earlier this year and was strapped into the simulator, no one knew what to expect. The custom-made, high-tech simulator — a blue steel skeleton bristling with cameras, sensors and video screens — had been designed to rocket Schmidt around a virtual speedway as he steered it with head movements.

A camera system on the simulator tracked the movement of Schmidt’s head from sensors in a ball cap he wore. He turned the car left or right simply by tilting his head in those directions. Tilting his head backward and forward accelerated and decelerated the car. And a sensor in a mouthpiece enabled him to brake by biting down.

One of the observers that day was Benjamin Ausdenmoore, a Wright State graduate who played a key role in outfitting the simulator.

“The amazing thing is he got in there, got hooked up, everything calibrated and then literally just took off,” Ausdenmoore recalled. “It was completely intuitive to the guy. He was heading right around the track at the top speed we allowed him to go, hitting the corners, holding the lines.”

It was an emotional experience both for Schmidt and the team that developed the simulator, which was rocking and shimmying as it raced around the virtual track.

“One line he left us with that day was: ‘For the past 14 years, I’ve always been the passenger. For the first time, I’m actually the driver again,’” Ausdenmoore quoted Schmidt as saying. “That pretty much touched everybody.”

Born and raised in the village of Cleves near Cincinnati, Ausdenmoore graduated from Taylor High School, where he excelled in math. He enrolled at Wright State to study bioinformatics, which involves the use of computer science to analyze biological data. But he quickly switched majors to biomedical engineering.

“I wanted to get more of a human-body focus because during that time I got interested in prosthetics — namely prosthetics that you actually integrate back with the body to restore that intuitive functionality,” he said.

Ausdenmoore learned not only how the circuitry in pacemakers and other devices works, but also about the complexity of the nervous system and how it learns to circumvent things that impair it.

After getting his bachelor’s degree in 2008, he enrolled in Wright State’s Ph.D. program for biomedical sciences, where he applied what he learned in engineering to analyze biological data in a faster, more accurate way.

After he was named STEM Student of the Month by the Dayton Area Defense Contractors Association, he got a job offer from Ball Aerospace. So in 2011 he opted to get his master’s degree in anatomy and physiology with a focus on neuroscience and then join Ball.

Ausdenmoore credits much of his career success to the Wright State faculty, who encouraged him to get involved with student organizations and other groups not connected to his studies.

“That instilled in me the concept of networking, getting to know people and creating those connections,” he said. “It was honestly through those connections that I got the STEM award and the job at Ball and on this project.”

Because he was interested in prosthetics and restoring a person’s lost physical capability, Ausdenmoore lobbied Ball officials to get on the simulator project.

He developed a computer tablet for the console that displays information about the vehicle’s status such as the speed it is commanded it to go, how much brake is being applied, and the vehicle’s location in relation to its boundaries. The tablet also flashes a warning if any errors are detected or if it loses connection with a system it is supposed to be monitoring. In addition, it would alert the backup driver in an actual vehicle to take over if the systems stop working.

During the simulator training sessions, Schmidt’s driving got better and the team kept raising the maximum speed he was allowed to go.

“At one point, we took that off completely and he got up to 230-some miles per hour, which is pretty much race pace at the Indianapolis 500,” Ausdenmoore said. “He was definitely able to fully control the vehicle with the controls that we gave him and do it as if it was just the natural thing to do.”

The next step for the team was to use the technology to actually create a semi-autonomous motor car, or SAM. They chose to install their sophisticated equipment in a 2014 Corvette Stingray C7, which has a V-8 engine that delivers 455 horsepower. Most of the modifications were made at the Sam Schmidt Motorsports warehouse in Indianapolis.

On May 6, Schmidt demonstrated the car at Wright-Patterson Air Force Base by driving it on the 7,100-foot-long runway next to the National Museum of the United States Air Force.

Then it was show time.

During time trials for the Indianapolis 500, Schmidt drove the car around the track six times, reaching a top speed of 97 mph. Looking on were Ball Aerospace officials and others who had had a hand in developing the car as well as Indy drivers and fans in the stands.

“As he was coming in, everybody was cheering, applauding. It was just a general feeling of elation,” Ausdenmoore said. “Sam was ecstatic. As he was rolling in, he had a huge smile on his face. He was soaking up every minute of it.”

Ausdenmoore said the technology could potentially be used in any vehicle and by both disabled drivers and those with no physical disabilities because it could offer better control. In the simulator, for example, drivers would crash the vehicle much more often when using the steering wheel than when they controlled the vehicle with head movements.

“It seems to be a lot more intuitive for people to use a motion like that to control the vehicle,” he said.

Watch a video on the semi-autonomous motor car project >>