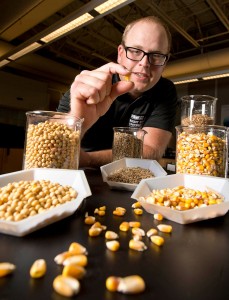 Greg McGlinch is helping to expand the agriculture program at Wright State’s Lake Campus, which now offers degrees in technical and applied studies with an agriculture concentration.

Like the crops he plants on his own farm, Greg McGlinch is helping grow the agriculture program at Wright State University’s Lake Campus.

The farmer, agronomist and educator joined the university in January, when the emerging program had 13 students. The program is expanding, with the numbers expected to increase this fall.

“The goal was to continue expanding and building on the program,” said McGlinch. “Western Ohio is the heart of agriculture in the state. There was a void that needed to be filled.”

“Farming is very business oriented today,” he said. “You’ve got to have a very sharp pencil and know what you’re doing to run a business of this nature.”

Previously, local students interested in pursuing careers in agriculture had to go off to college in Columbus, Wilmington or Wooster or make long commutes there. With a program at Wright State, they could further their education while remaining active on their own farms.

McGlinch has been heavily promoting the program, speaking at local high schools, networking with his contacts in the agricultural education community, manning a booth at the Ohio Future Farmers of America convention and assisting with the Mercer County Agriculture Day.

“It’s a hands-on, in-the-field, learning-the-trade education,” McGlinch said. “A lot of the students are coming off the farm and maybe want to expand and improve production. So you’re going to learn some of the new technology, new practices and expand on old practices.”

Many of the adjunct professors come straight from the agricultural industry.

“You don’t get any more applied than that,” McGlinch said. “They’ve worked with the farmers. They’re very good in knowing and handling the issues and techniques and practices.”

He said the courses are affordable, convenient (scheduled toward the evening so students can work on their farms during the day) and can be taken in an accelerated pace.

McGlinch himself teaches Introduction to Agronomy.

“The nice thing is I still farm. So everything I do, I try to relate back into the classroom,” he said. “I’m not disconnected from the agriculture world.”

McGlinch grew up on a family farm in nearby Versailles — 450 tillable acres that produces corn, soybeans, cereal rye and wheat. He became interested in teaching agriculture after joining the Future Farmers of America (FFA) as a freshman at Versailles High School.

He said he was drawn to agriculture as a career because it is so multifaceted.

“If you’re a farmer, you’re an engineer, a chemist, an accountant, a veterinarian — you name it. And I enjoyed all of those,” he said. “I wanted to get out there and help the future students understand what they could get into.”

“I took an FFA program that was very small and began to grow it and really expand it,” he said. “I have a lot of students who still tell me about their experience and how it has helped them.”

McGlinch then moved to Iowa, where he worked for a local farmer and in the materials engineering lab at the John Deere Engine Works facility, where he analyzed the metal parts of motors used in agricultural and construction equipment.

After getting his master’s degree in agronomy from Iowa State University, he returned to the family farm in Ohio and also took a job with the Darke Soil and Water Conservation District. But teaching beckoned, and he landed at Wright State.

“Today’s students see a lot of the opportunities in agriculture and crave that knowledge to move forward and continually learn,” he said. “Even if they still farm, they want to get additional exposure to education, get some new concepts and ideas so they can continue to advance.”

The future of the agricultural program looks bright.

A total of $1.5 million in state funding has been awarded for a Progressive Agriculture Convention and Education Center, which will be built at the Mercer County Fairgrounds. The facility will include classrooms, labs and an arena for livestock and farm equipment that will be used to teach.

McGlinch is hoping the university’s agricultural program will evolve into the offering of specialized degrees such as agronomy, animal science and farm business.

“I see it growing and Wright State becoming a name in agriculture,” he said.