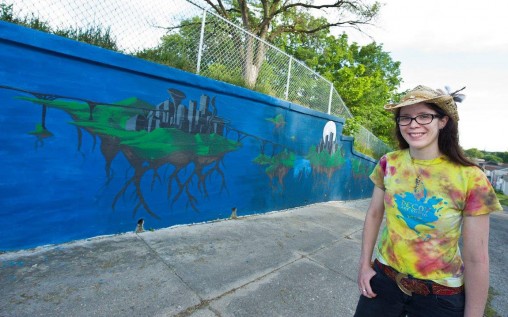 The dimples. That was the toughest part. Getting the dimples filled in with paint.

But for nearly the past year, Wright State University fine arts graduate Megan Smallwood has been doing just that. And now she and a group of volunteers have completed a colorful mural that has transformed a graffiti-scarred concrete retaining wall on Dayton’s east side into a neighborhood landmark that is creating a greater sense of community.

“People feel very possessive about it,” said Smallwood. “It’s their wall now. They want to take care of it and see it last.”

Crowning the top of a hill, the mural — which is nearly 60 yards long — is a rainbow of bright, sunny colors — greens, yellows and blues. It is a “timescape” of Dayton, showing the city’s past, present and future. There is a moon, a monorail and islands floating in space.

“These floating islands are something that have always been in my head — the idea of land in dreamland,” Smallwood said. “The mural portrays things about Dayton that are important and exciting and make people dream about the future.”

Smallwood said her inspiration was to put something beautiful in place of a wall covered with hateful, nasty graffiti.

“We wanted to give the community something they could be proud of,” she said. “And they love it. People will be flying up the hill, suddenly hit the brakes, and say, ‘Oh my gosh. That’s so cool!’ It’s fun to see people react to it.”

On this day, Smallwood — wearing a tie-dye T-shirt, straw hat, her hands black with paint — sits on an overturned plastic bucket and puts the final touches on the mural. 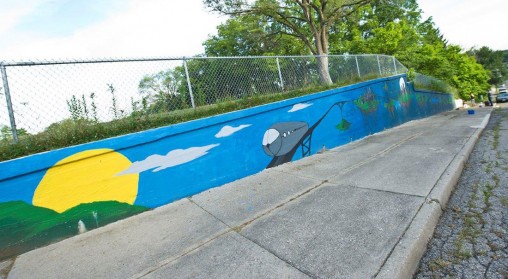 Crowning the top of a hill, the bright 60-yard-long mural is a “timescape” of Dayton, showing the city’s past, present and future.

The neighborhood is one of old frame houses, including majestic Victorians. Many have seen better days. Others are newly renovated. There is a hint of drugs and crime. But there is also the quiet strength of residents determined to give new life to the hood.

“It’s a challenged neighborhood that has a lot of people and organizations working to revitalize it,” said Crawford, who has lived there for 15 years following a 25-year career with the U.S. Postal Service. “It’s definitely on the upswing. We’ve got a lot of talented people giving of their time.”

Crawford himself spent many hours wielding a paintbrush, as did some of the neighborhood teens. He is confident and hopeful that the mural won’t be defaced by graffiti.

“When the kids were doing the base coat, they got a sense of connectivity to it, that they were part of the project,” he said. “That’s what helps protect your work.”

Smallwood had to navigate the design, city approval and funding processes, doing it with the help of East End Community Services and the Dayton Graffiti Action Partnership.

When she first began drawing on the wall in September 2013, neighbors called the police. When they realized what she was trying to do, they rallied around her.

Smallwood added a “future” scene to the original design to get the residents to dream about possibilities.

“This has been a city about innovation. So many marvelous things have been invented here,” she said. “That kind of history needs to live on. We have a lot of brilliant minds in Dayton, and I want to encourage that.”

The painting continued off and on through a brutal winter, with the artists sometimes seeking cover in a makeshift shelter warmed by a small space heater.

Smallwood used about 30 gallons of latex paint designed for concrete, purchased by East End via donations and grants from the city. She spent 150 hours of her own time on the mural — the equivalent of working nearly a week around the clock.

The mural is the latest of similar works in Dayton. Murals have also been painted on Third Street and Fifth Street. Smallwood said she would like to see more artists tackle similar large public projects.

“It’s kind of intimidating to face something that big for a lot of people,” she said. “But I’ve always dreamed big. I’ve always wanted to see my work really large and share it with people.”

Smallwood grew up in Brown County east of Cincinnati. She was majoring in biology at Southern State Community College, but immediately decided to switch her major to art after taking a ceramics course.

“It’s the doing something with your hands,” she said. “I love the process of creating something. When you make something, you put a lot of your soul into it.”

Smallwood came to Wright State in 2009 and got her bachelor’s degree in fine arts with a concentration in sculpture in 2011.

“There were some professors who were just really special to me; we connected really well,” she said. “They just made a huge effort to encourage me to do what I wanted to do and to take on challenges.”

For her senior project, she produced a large swirling pink sculpture that was placed outside the library.

Smallwood currently lives in Beavercreek, where she operates Decoy Art Studio. She gives art lessons to people of all ages, working with three other Wright State graduates.

Smallwood said she hopes the mural changes how people think of their surroundings and inspires them to do more with their lives.

“A lot of people feel that Dayton is stagnant; I think that mentality is totally outdated,” she said. “This mural is trying to give people a vision for the future, something to think about. I would like them to start dreaming about something.”