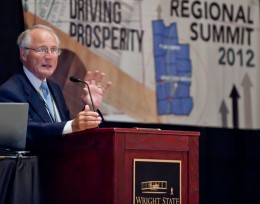 The daylong summit, which is expected to draw business leaders, educators, government officials and others, will be held at the Wright State Nutter Center on Friday, Aug. 15, beginning at 8 a.m.

“Workforce development and globalization are increasingly important to colleges and universities as they strive to serve their communities in ways that are relevant for driving the state’s economy and its quality of life, as well as serving the needs of 21st century students,” said Hopkins. “The Regional Summit is an opportunity for the region to come together and exchange ideas to move us forward.”

Speakers will address how higher education serves the workforce development needs of the region and state and the increasing need for globalizing education to create opportunities for the economy, including sharing specific examples and asking for participants’ feedback and ideas.

For more information and to register for the Regional Summit, please visit: wright.edu/regional-summit.