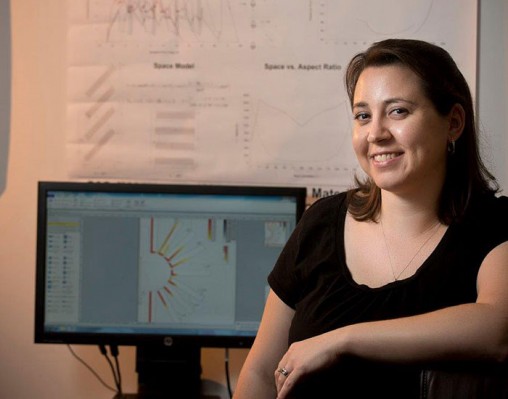 Five years after her world was turned upside down, Corinne Mowrey is pursuing a Ph.D. in engineering, has won several national scholarships and has been published in two peer-reviewed journals.

Lab Mom. That’s what she is affectionately called by her younger colleagues. But 33-year-old Corinne Mowrey takes it all in stride because she knows she is in a sweet spot.

Five years ago, her world was turned upside down when she lost her job as a civil engineer. Today, the mother of two is in hot pursuit of her Ph.D. at Wright State University’s College of Engineering and Computer Science, has won several nationally competitive scholarships and has been published in two peer-reviewed journals.

“I honestly think I was depressed before I came here,” Mowrey said. “But when I came to Wright State, all of a sudden I had purpose again. I had something I needed to accomplish, somebody I needed to prove myself to.”

She is the daughter of Air Force parents — her father a project manager and her mother an infection-control nurse. Growing up, Mowrey lived on or near Air Force bases in Florida, Colorado, Texas and Illinois.

As a teenager she was drawn to the arts. At Greenon High School in Enon, she was in Show Choir, a singing and dancing group that once went to Branson, Mo., for a national competition. And she worked at the Ohio Renaissance Festival, a fictional 16th century English village that features costumed performers.

But Mowrey also liked science and math and was encouraged by her father to go into engineering. She attended a Women in Engineering camp, got interested in the environmental aspect of civil engineering and obtained her bachelor’s degree in civil engineering from The Ohio State University.

After graduation, she was hired by PSI, a construction testing consulting company. As a staff engineer, she managed the technician workforce and oversaw projects that involved concrete and soil testing at commercial buildings.

Then in 2009, the construction business slowed and Mowrey lost her job.

“I sat at home and wallowed in my sorrow a bit; it’s quite a blow to the ego to be let go,” she said.

Then Mowrey realized that she never really liked most parts of her construction job. So she decided she wanted to switch careers and opted to go back to college even though she had a young daughter, a mortgage and an understanding — but nervous — husband.

Her husband, Mark, attended Wright State and worked as a photographer for The Guardian, later getting his bachelor’s degree in civil engineering from the University of Dayton. He is currently deputy engineer for Champaign County, and the couple lives in Urbana with their two daughters, ages 6 and 2.

Wright State was fairly close to Mowrey’s home and was relatively free of the parking headaches and large classes she knew she would encounter at Ohio State.

So she enrolled at Wright State in the winter of 2010 and began pursuing her master’s degree in industrial and systems engineering after realizing that the one thing she had liked about her construction job was project management.

“It was looking at a schedule and trying to come up with the best way to fit people into the puzzle, to fill everything while minimizing our costs,” she said. “And systems engineers are the ultimate project managers.”

Mowrey got her master’s degree in 2011 and is now pursuing her Ph.D. in engineering with a focus on supply chain management. As part of a summer independent study, she developed a plan for delivering supplies from distributors to a fast-food chain of stores all over Ohio.

Pinned to a wall of her lab is a poster that lays out the project, featuring terminology that includes “field of regard,” “slicing algorithm” and “space model.”

She has been awarded scholarships by the Institute of Industrial Engineers and the Material Handling Education Foundation.

“Her story is inspiring, especially to a ton of working parents who might be thinking of returning to academia to pursue their lifelong dreams,” said Pratik J. Parikh, associate professor of industrial and systems engineering.

After graduation, Mowrey wants to pursue a career in logistics and supply chain management.

“It sounds stupid, but I know so many people who work in jobs just to get paid,” she said. “I’d really like to work in research and development. It’s kind of like the ultimate playground.”

Mowrey said her career change and initial uncertainty of the future has strengthened her faith.

“Hard times are going to hit you, but as long as you have faith, there is somebody who is going to be watching out for you and will always see you through,” she said. “There is nothing you can’t do.”