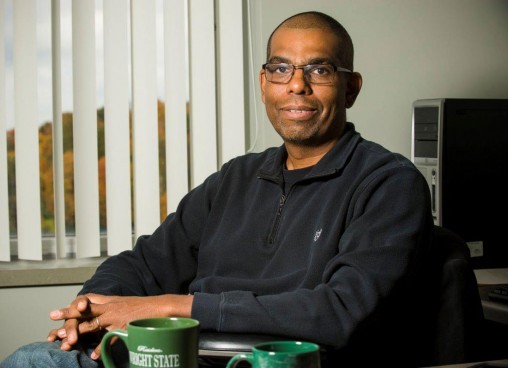 Newspaper veteran Ray Marcano is helping the next generation of journalists by teaching digital media to Wright State students.

Growing up in the James Monroe housing project in the Bronx was no picnic. A steady diet of shootings, stabbings and drug-fueled crime was part of that New York City world.

But Ray Marcano learned how to survive on the street. And he did it while cooking and caring for his three younger siblings in a fatherless home.

And he also did it while clawing for a career in journalism, a career that would bullet him into the upper reaches of the profession — former national president of the Society of Professional Journalists, a two-time Pulitzer juror and a Fulbright Fellow.

Today, the longtime and now retired reporter/editor/manager at the Dayton Daily News is an instructor in Wright State’s College of Liberal Arts. And he is using his experience to open the world of digital media to students and help them develop the skills to write, edit and publish stories online.

“When you introduce students to concepts they had no idea existed and then you see them do something they didn’t think they could do and that bulb goes off?” Marcano said. “I get a kick out of that.”

Marcano’s steely determination to succeed was fired in the crucible of the hard-scrabble Bronx.

“It was extremely difficult,” he recalled. “You’ve got to be phenomenally mentally tough, and you have to have an exterior that says ‘If you mess with me, I will slit your throat.’ You do what you do to survive.”

Marcano also learned another important life skill — how to cook. When he was 8, his grandmother pulled him into the kitchen.

“From that point, I was absolutely hooked,” he said. “My father died when I was very young, so I cooked for all of my brothers and sisters growing up. At some point in my young foolish life, I thought I was going to open a restaurant.”

(Today, in his kitchen at home, Marcano turns out gourmet dishes such as chicken and green chiles stuffed with bacon and spinach; roasted tomatoes brimming with mushrooms, spinach, bacon and feta cheese; and strip steak topped with carmelized onions and roasted garlic/parsley butter.)

Marcano attended the High School of Music and Art, made famous by the movie and television series “Fame.” He aspired to be a musician, studying voice and percussion. He played in the school jazz band that included bass guitarist Marcus Miller, who went on to work with trumpeter Miles Davis, pianist Herbie Hancock, singer Luther Vandross and saxophonist David Sanborn as well as maintaining a successful solo career.

“I realized there was no way I could ever match his talent,” Marcano said of Miller. “He once skipped practice to play with Gladys Knight at Madison Square Garden.”

So Marcano dropped his dream of becoming a musician and decided to jump into journalism when he wrote a futuristic story about a U.S. satellite that knocked nuclear missiles out of the sky and was encouraged by his high school creative-writing teacher.

It didn’t start well. After covering a high school football game for the Westchester Rockland News, the 18-year-old Marcano had his story returned to him by the sports editor, who scrawled in big red letters: “You will never be a journalist!”

Undeterred, and with a Bronx-like zeal, Marcano applied for a news editor job at the daily newspaper in Vinita, Okla. He checked on the job status by calling the publisher every week for five straight weeks.

He was finally told, “Son, if you want this job that bad coming from New York City, it’s yours.”

“Persistence,” Marcano said. “That’s what I tell all my students. And use the phone. Don’t text, don’t email, get on the phone.”

For the next two years, Marcano did virtually everything at the paper, from writing stories and headlines and laying them out. He moved on to the Tulsa World for a year and then in 1984 joined the Dayton Daily News.

Marcano started as a minority affairs reporter and for the next 25 years work as a reporter, night city editor, sports editor, metro editor and deputy managing editor. He led the newspaper’s coverage in 2004 of the Ohio State men’s basketball team under coach Jim O’Brien, who was dismissed after being accused of NCAA rules violations.

“We absolutely blew everybody away,” Marcano recalled. “It was very satisfying.”

Marcano moved to the Cox Media Group, where he helped the chain’s 85 properties grow their audience. During this time, he earned his master’s degree in business administration from Baker College of Flint. In 2009, he joined the faculty at Wright State as an adjunct in the Department of Communication.

As part of his advanced digital media class, Marcano and Dayton Daily News editor Ken Paxson launched DailyFlipz, a mobile website that gives students a platform to develop their reporting and writing skills.

“I love interacting with students who lack confidence that they can do the work,” Marcano said. “It just takes that little push to show them that they can.”

Marcano says Wright State is special because the university gives everyone an opportunity to succeed.