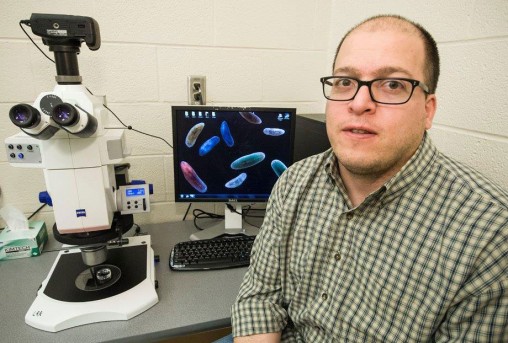 They live on minced liver. In fact, they love it. They are the planarian flatworms in the Wright State University lab of assistant biology professor Labib Rouhana — and they are contributing to solving the puzzle of human infertility.

Planarians are tiny flatworms, some of which have an extraordinary ability to regenerate lost body parts. A planarian can grow a new body from its severed head and a new head from its severed body.

“If I chop one of them into five pieces, a week later I will have five animals,” Rouhana said.

Stem cells are biological cells that can differentiate into specialized cells and divide to produce more stem cells. They can be artificially grown and transformed into muscles or nerves.

Rouhana is using the planarian to analyze gene expression in stem cells because they comprise as much as 30 percent of the flatworm’s body, and they are continuously proliferating and differentiating into the cells that are required for study.

Some of the stem cells develop into the flatworm’s reproductive cells, and different genes are switched on and switched off as part of that development. Much of the genetic material activated in this process is similar to that of humans.

“We have the potential for revealing reasons for infertility,” Rouhana said. “The more information we obtain, the more we’re able to hope that it can be applied in the clinics.”

About 10 years ago scientists were able to determine the genetic sequence of the human genome.

“It’s a lot of information; it’s like words in a book of a different language,” Rouhana said. “Little by little we begin to understand what these words mean, or what each of these genes does.”

However, the function of many of the genes is unknown.

“So identifying a gene that is required in stem cells to proliferate in the planarian can be compared to a similar gene in a different organism, and often the presence of identical gene functions go all the way to mammals,” he said.

Rouhana just received a $439,000 grant from the National Institutes of Health to proceed with the project.

Over the next few years, he and his student researchers will try to verify more than 1,000 genes in the planarian’s reproductive cells. As part of these efforts, students can participate in his “Laboratory course on genetic screens using RNAi,” which will be offered over the next three summers.

After the planarians are cut up, the regenerates are fed minced liver, which helps them quickly grow their new bodies. Chemical treatments and fluorescent light make the planarians’ cells permeable and nearly transparent. The cells are then dyed so that specific gene expression can be seen under a microscope.

Labib recently spoke on regeneration at the National Academy of Science’s Kavli Frontiers of Science symposia in Irvine, Calif. The symposia bring together outstanding young scientists to discuss exciting advances and opportunities in a broad range of disciplines.

Rouhana grew up in Chihuahua, Mexico, the son of a Lebanese father. When Rouhana was 14, he and his family moved to El Paso, Texas.

While he was at the University of Texas-El Paso, he became interested in biology when he learned that scientists were sequencing the human genome.

“The human body is an amazing machine,” he said. “We think, we maintain memories, we respond to stimuli, and in the case of females we give rise to a whole new human being. And all of these abilities are encoded in this genome. I said, ‘Well, I want to learn how that works.’”

After working in a summer research program in New York City, Rouhana decided that trying to unlock the secrets of the genome was how he wanted to spend the rest of his life.

He went on to get his bachelor’s degree in biology at Texas-El Paso and his Ph.D. in genetics from the University of Wisconsin. Then he worked in planarian labs in Kyoto, Japan, and the University of Illinois. He joined the faculty at Wright State in September 2013.

Rouhana says the Department of Biology in the College of Science and Mathematics has given him the resources, the freedom and the collaborative support to pursue his research.

“I was able to negotiate space for the laboratory, which helped me get the grant,” he said. “They gave me a budget so I could buy equipment and hire personnel. And they let me teach a course that enables me to exchange ideas about regeneration with students. That helps me come up with new ideas.”