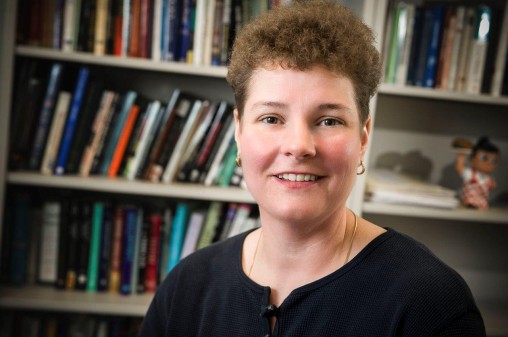 Sociology professor Karen Lahm has spent her career studying prisons and their populations. She will discuss “Women Inmates: An Exploration of Misconduct and Victimization Behind Bars” during the College of Liberal Arts Research Conference Feb. 9 in the Creative Arts Center’s Schuster Hall .

Women’s prisons are filling up fast, becoming havens for increasingly violent behavior, are ripe to become more dangerous places. And communities are facing these inmates in neighborhoods and shopping malls after their release.

So says Karen Lahm, a Wright State University sociology professor who has spent her career studying prisons and their populations. It is vital, she says, to take greater steps to educate, rehabilitate and socialize inmates before they re-enter society.

“They just don’t go live under a bridge; they could be coming to anybody’s community,” Lahm said. “We need to have prisons that offer vocational and educational programs and enable inmates to maintain their family ties. How we treat them in prison will translate into how they act when they get back out here in society.”

Lahm got her bachelor’s degree in sociology and master’s in applied behavioral science at Wright State and her Ph.D. in sociology from the University of Kentucky. For her dissertation, she investigated violence among more than 1,000 male inmates at 30 different institutions in Kentucky, Tennessee and Ohio.

After working at Capital University in Columbus for five years, Lahm joined the faculty at Wright State in 2006. She teaches in the crime and justice undergraduate program and applied behavioral science graduate program. Her emphasis is on criminology and prisons.

“My natural interest was looking at how folks are behaving behind bars. We take these people, throw them in prison and pretty much forget about them,” she said. “Just because you are in a prison doesn’t mean it has to be a violent place.”

“That’s what most violence is behind bars, especially for women,” she said. “A lot of it seems to be issues of spitting, throwing things. Although there is not as much physical violence among female inmates, there are a lot more verbal altercations and a lot of theft. And there is some fighting among inmates.”

“We’re seeing more women coming in with violent criminal histories. We see women getting longer sentences,” she said. “Conditions are ripe for the institutions to be a little bit more dangerous.”

Women make up less than 10 percent of the total U.S. prison population, but the number of female inmates has been growing exponentially over the past decade. About 600,000 male and female inmates are being released back into society every year.

The last time Lahm took her students to the Ohio Reformatory for Women at Marysville, a new 500-bed dorm had just opened. When the students returned the following semester, it was full.

The crowding is being fueled by drug-related crimes as well as financial desperation.

“I think especially for women it’s economic issues,” she said. “There are a lot more women divorced, single caretakers of children.”

When Lahm conducts surveys of the inmates, many pour out their hearts.

“They want to tell you what being in prison is like. They’ll write all over the surveys, take the back page up,” she said. “Some of the stories are so sad.”

Despite the seriousness of her field, Lahm has her playful side. On her office wall is a poster of Kiss, a hard rock band formed in 1973 and known for its face paint, stage outfits and elaborate performances that feature fire breathing, smoking guitars and pyrotechnics.

“They are just fun,” Lahm said. “People may call them gimmicky, but they’ve been around for how long now? I admire them because they are great businessmen.”

Lahm grew up Kettering, Ohio, attending Fairmont High School. Her father owned a tool-and-die shop, where Lahm worked for six years. She prides herself on her blue-collar upbringing.

“I got to clean urinals and drive the truck,” she said.

When Lahm was working on her master’s degree at Wright State, she also worked at McDonald’s, starting at 4:30 a.m. Then she would go to her other job before coming to Wright State for night classes.

Lahm says everything about Wright State has been special for her.

“I would have never gotten into this field without the wonderful professors in the Department of Sociology and Anthropology who let me do independent studies, who let me go with them to prisons,” she said. “They really were the ones who opened my eyes and fostered this passion that I have. I can’t imagine my life without Wright State.”