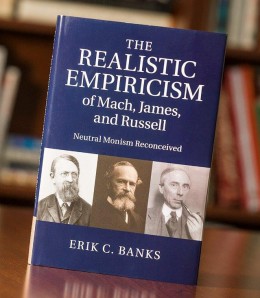 Logic. It was a powerful, irresistible force for Erik C. Banks.

During one winter break at Bennington College in Vermont, the undergraduate Banks bought a blackboard and worked through a pile of logic textbooks. Then he decided to design his own curriculum — analytic philosophy.

“It was logic that grabbed me,” he recalled.

Today, Banks is an associate professor of philosophy at Wright State University. And Cambridge University Press 2014 has just published his book, “The Realistic Empiricism of Mach, James and Russell.”

In his book, Banks explores the ways in which the three philosophers can be connected and applies their ideas to the relation of sensations to brain processes.

Banks began work on the book during a Fulbright year in 2004-05 in Germany when he was a guest at the Max Planck Institute for History of Science in Berlin.

“I am a naturalist philosopher; for me, philosophy without science is empty and science without philosophy is blind,” he said. “I think the job of philosophy should be to look at the whole historical-conceptual spectrum of ideas and ask: what are the possibilities? I hope to show that Realistic Empiricism is not only a historically significant view, it is also well worth considering today.”

Banks grew up in New York City, the son of an architect father and mother who is an art historian and museum director. He attended Stuyvesant High School, a math and science public school.

Erik Banks is an associate professor of philosophy at Wright State University.

He got his bachelor’s degree in philosophy at Bennington and went on to the City University of New York, where he earned his Ph.D. in philosophy with a focus on logic and philosophy of science. He joined the faculty at Wright State in 2006.

Banks says Wright State is wonderful environment in which to work and teach.

“I can feel the support from colleagues and the administration; they want us to be successful,” he said. “I’ve had students here who are as good as students anywhere, bar none. We just have to make sure they know it.”

Banks made his bones writing about Mach, who is known for the Mach number when a plane breaks the sound barrier. But Mach was also a major influence on Albert Einstein and many other physicists in the early 20th century.

Banks’ book about Mach in 2003 traced the general movement in Realistic Empiricism philosophy, which Mach began and was continued by James and Russell.

Banks says he would summarize his new book by throwing up a big picture of the galaxy with atoms and molecules and a big sign that reads: “Got Mind?”

“One of the biggest puzzles in philosophy is how we can have experiences of color and sound with quality and rich detail if the experiences are simply neurons firing off in different ways in our brains,” he said. “Why would electrical pulses and chemical transmitters across synapses look like anything?”

Banks says Realistic Empiricism is a kind of answer to that question.

“But we need to tweak our understanding of the physical a bit,” he said, “focusing more on concrete individual events and happenings and less on abstract objects and laws.”

Banks said it will be a long time before any of the hypotheses in his book can be tested empirically.

“But history shows that over time, a new view in philosophy can be very powerful indeed,” he said, “reorganizing huge blocks of our knowledge and pushing us in new directions.”