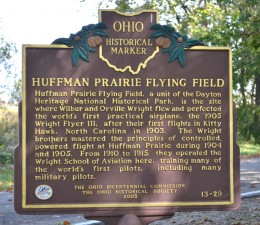 There are currently 1,518 historical markers around Ohio, including this marker for Huffman Prairie in Greene County, where Wilbur and Orville Wright flew and perfected the world’s first practical airplane.

The students were among many ninth graders at the school who researched historic figures and then crafted biographies as part of a class project. They used the biographies to apply for an official state historical marker with the Ohio History Connection, formerly the Ohio Historical Society.

“I am very proud of the students and their efforts,” said Kevin Lydy, U.S. history and comparative religions teacher at the school. “I loved partnering with the Ohio History Connection, providing an opportunity for students to contribute to their community.”

There are currently 1,518 historical markers around the state. The cast aluminum signposts recognize everything from John Morgan’s infamous Civil War raid to the invention of the cash register to the birthplace of “Gone with the Wind’s” Clark Gable.

STEM students Chloe Johnson and Anjali Phadke argued for a marker for Stang, a Catholic nun from Dayton who spent years in Brazil fighting for justice for farmers there before being assassinated.

“Her story did not only touch the people of the villages of Brazil, but it also touched many people in America,” the students wrote. 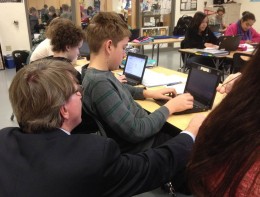 Students Christian Peters and Devin Wade advocated for Henry, an African-American who was elected mayor of Springfield and was later chosen by Presidents Johnson and Nixon for fact-finding missions to Vietnam.

“Mr. Henry gave African-Americans a glimmer of hope by getting into office,” the students wrote.

Carrin Ragland and McKenna Toller wrote about Hamilton, known for her “liberation literature” that educated children and young adults about the struggles of African-Americans.

And Dylan Flippo and Sydney Gerdes wrote about Earley, a graduate of Wilberforce University who was one of the first African-American officers in the Women’s Army Corps.

While the markers have been approved, the students must help secure funding to ensure that they are erected. In the meantime, they will work with the Ohio History Connection to refine and finalize the text that would appear on the markers.

Birth of the STEM (science, technology, engineering and math) school began in 2007 when Wright State President David R. Hopkins rang up then-Education Dean Gregory Bernhardt and urged him to organize an effort to start a STEM school in Dayton.

The school opened in 2009 and in June 2013 graduated its first class — 52 talented seniors bound for the likes of Wright State, Emory, Purdue, Texas A&M, Ohio State, Rose-Hulman Institute of Technology and other schools.

It is one of 12 public STEM schools across Ohio. They are designed to offer students a relevant, real-world education that prepares them for college and the working world. The students participate in inquiry and project-based instruction that marries traditional STEM content with social studies, language arts, the fine arts and wellness and fitness.