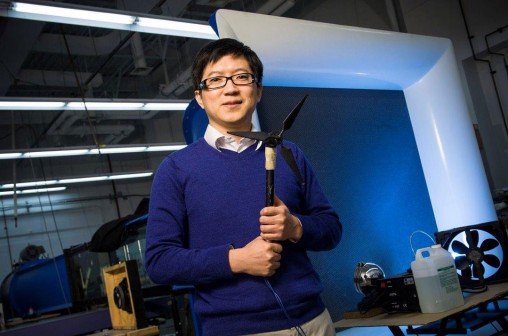 A propeller blade that could revolutionize wind power by making turbines more powerful, efficient, quieter and less expensive is being tested by researchers at Wright State University.

The testing is being done in a wind tunnel at the Russ Engineering Building by assistant engineering professor Zifeng Yang, Ph.D., and graduate student Laura Carpenter.

“This new design is an amazing idea to us,” said Yang. “We need to collect data to prove that this concept works.”

The patented design was brought to the College of Engineering and Computer Science’s Renewable and Clean Energy Program by a local inventor. The connection came at the urging of 1971 systems engineering alumnus Steve Miller, who in August attended Wright State’s 2014 Alumni College, which is made up of alumni from various class years, majors and regions.

Wind power is harnessed from air flow using propeller-driven turbines to produce electrical power. It serves as an alternative to fossil fuels and is more environmentally friendly.

“Windmills” on wind farms account for about 7 percent of U.S. power generation, with a single turbine capable of powering 500 homes. The U.S. Department of Energy has a goal of increasing reliance on wind power to 20 percent by 2030.

Typical modern wind propellers have three blades and are up to 300 feet in diameter. They can be noisy and create turbulence that can limit speed and affect the performance of nearby wind turbines.

The new propeller blade being tested at Wright State curls back and attaches to itself in a teardrop design. Since the propeller has no tips, it sharply reduces the vortices, or turbulence, given off. 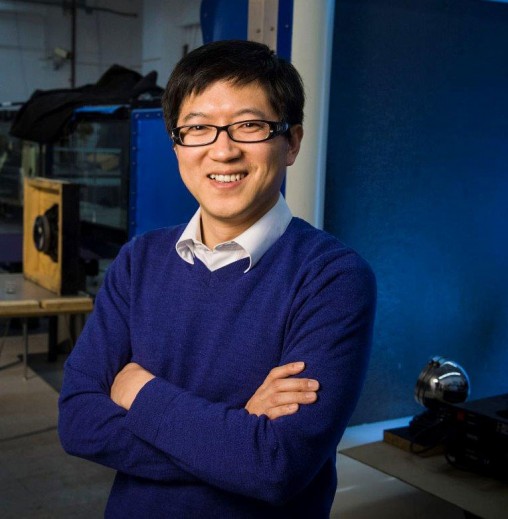 Zifeng Yang is creating a miniature model of the propeller blade that can be tested in the Russ Engineering Building’s wind tunnel.

Yang says the new design could result in stronger blades that could rotate faster, produce more power and require less maintenance. It could also reduce noise and the turbulence-created vibration that batters and wears out neighboring turbines, he said.

In addition, it could mean smaller, less expensive blades that could produce the same amount of power, the ability to site turbines closer together and the spread of wind farms to areas that have less wind.

Yang is creating a miniature model — 12 inches in diameter — that can be used in the wind tunnel testing. He and Carpenter, who won a design competition against two other students, will test the propeller for turbulence, power, torque and rotational speeds.

“We don’t want to increase the thrust acting on the wind tower too much, to avoid having to redesign and replace existing towers,” Yang said.

He expects the testing to be completed in early 2016.