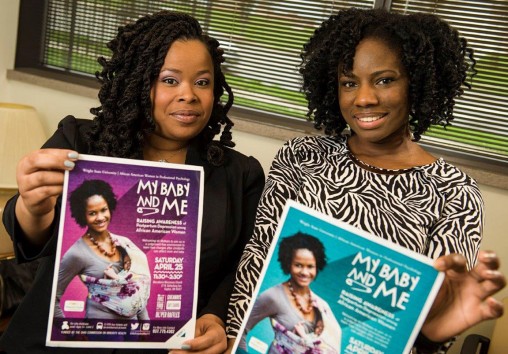 Raising awareness about postpartum depression among African-American women is the goal of two students in Wright State University’s School of Professional Psychology who are hosting community programs on the topic.

Students Tawana Jackson and Tawanna Howard are using a grant from the Ohio Commission on Minority Health to do screenings and make presentations at the two “My Baby & Me” programs.

“What we want to do is educate the women about postpartum depression and give them language to describe what they may be going through,” said Jackson. “We want to curb some of the stress and anxiety that the women may feel by giving them a venue to have an honest conversation with other mothers and providing them with resources.”

“The numbers spike up even more when you look at women of color,” she said. “So we are targeting a hard-to-reach yet very high-risk population with the program.”

Jackson became interested in psychology when she was about 12 years old after she helped a friend’s older high-school sister with relationship advice.

Growing up in the Lorain, Ohio, area, Jackson is a first-generation college student. She got her bachelor’s in psychology from Bowling Green State University and her master’s from Ball State.

Howard, who grew up in Queens, N.Y., is also a first-generation college student. She got her bachelor’s degree in psychology from Southern Adventist University in Tennessee before coming to Wright State.

“I appreciate growing up in New York,” she said. “I was exposed to many different cultures there. I think that served me well as I now work with people from many different walks of life.”

Early interactions with her family and experience in working as a beautician sparked her interest in psychology.

“There may be some correlation between therapists and beauticians because women tend to share very personal, intimate details with you at times,” Howard said.

Incentives for attending the programs include self-care bags with items such as body wash, loofah sponges, candles, baby books and activity journals. In addition, there will be raffles for gift cards and diapers. RTA bus passes will be available for those with limited transportation.

The students credit the instrumental support for their effort they have gotten from their advisers — associate professor Janeece Warfield and Joann Mawasha, interim director of Wright State’s Bolinga Black Cultural Resources Center.