Emerald ash borer is an invasive green beetle laying waste to ash trees in the United States and Canada.

Biology professor Don Cipollini, director of Wright State University’s Environmental Sciences Ph.D. Program, announced in October that the beetle had spread to white fringetree. The identities of adult and larval beetles collected from white fringetree were confirmed on the basis of morphology and DNA sequencing.

Now, Cipollini suggests that use of white fringetree by emerald ash borer is likely to be widespread and that the beetle may move to close relatives too.

“It’s certainly the biggest discovery I’ve ever made,” said Cipollini, who has been studying emerald ash borer for 10 years. “It has taken over my life. A lot of people are interested in this. They are calling all the time to see what’s happening.” 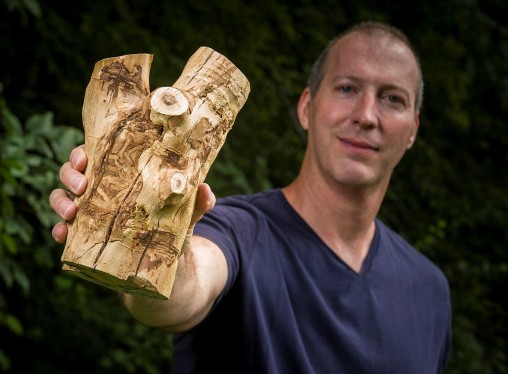 Wright State biology professor Don Cipollini suggests use of white fringetree by emerald ash borer is likely to be widespread and that the beetle may move to close relatives. (Photos by Chris Snyder)

Over the winter, Cipollini and collaborators collected stems of infested white fringetrees in the field and brought them to the laboratory. After completing their development, live adults emerged from several trees.

“Many people have remained skeptical without seeing that, given that I had only found dead adults in these trees previously,” he said. “We’ve now done additional tests with stems of trees that we collected in the field. When you directly place the eggs of the beetle on white fringetree in the laboratory, you get well-developed larvae back out.”

Other questions raised immediately upon announcement of the discovery concerned the fact that white fringetree was occasionally grafted on ash rootstocks in the past.

“None of the trees that I have examined so far show evidence that they were grafted, but we would like to examine grafted material if we can find it,” said Cipollini.

He also looked at the Chinese fringetree, a closely related Asian species.

“It seems to be resistant,” he said. “There is no evidence of infestation in the field, and when you do the tests in the laboratory the larvae do not develop. They attempt to feed, but they just don’t make it longer than a couple days.”

However, some emerald ash borer larvae were able to develop in a native North American tree called devilwood. Larvae were small, but a few survived a 40-day test in the laboratory.

Cipollini has done much of his investigation at Spring Grove Cemetery and Arboretum in Cincinnati. The site, which is on the National Historic Register, boasts 28 white fringetrees, 11 Chinese fringetrees and devilwood, a Florida-Georgia-Mississippi species that is closely related to white fringetree. Spring Grove holds the Ohio state champion white fringetree, an award given based on tree size and quality.

He also recently traveled to Morton Arboretum in the western suburbs of Chicago, where he found nearly half of its 17 white fringetrees infested with emerald ash borer. This extends earlier observations of attack in southwestern Ohio to a larger geographic area.

Up until now, Cipollini has only examined ornamental plantings of infested trees. But he and his team have now identified and marked wild populations of white fringetree in southern Ohio for monitoring. This will enable them to study the trees before, during and after the invasion wave of ash borers, something that hasn’t been done yet.

He also traveled to the Sand Hills region of central Florida to examine a federally endangered relative called pygmy fringetree, a well-known tree in the region that is held up as a conservation icon.

“I think that species is going to prove to be susceptible as well,” he said. “The stems supported larval development during an initial screen in the lab. Emerald ash borer is not yet in Florida, but it will get there soon enough.” 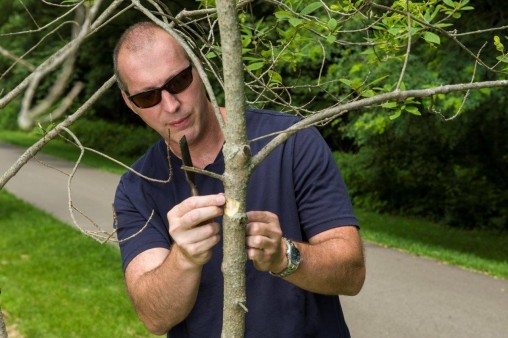 Don Cipollini has traveled around Ohio and to Chicago and Florida investigating the potential spread of emerald ash borer.

Native to Asia, the emerald ash borer was introduced to the United States near Detroit in 2002. It is believed to have been in ash wood used to stabilize crates during shipping.

Cipollini has been working with colleagues to come up with new strains of ash trees that would be resistant to the insect.

White fringetree, a close relative of ash, is a deciduous shrub or small tree that can grow up to 30 feet tall. It has white flowers and a purple, olive-like fruit. It is known for its relative lack of pest and disease problems and has never been reported as a host to wood borers related to emerald ash borer.

“After observing the condition of nearly 100 ornamental white fringetrees, I now expect that the majority of white fringetrees faced with sufficient pressure from emerald ash borer will get infested to some extent,” Cipollini said. “I’ve seen trees that have been killed by this or had parts of them die. But many trees that can look healthy show evidence that they’ve been attacked for several years, so we still don’t know what’s going to happen in the long run. More work is necessary.”

Like a crime scene investigator conducting an autopsy in his lab, on this day Cipollini fingertips white fringetree stems he pulls from his black backpack. Stems as small as a half-inch in diameter show exit holes from emerald ash borer. Nearby are blue, plastic barrels stuffed with larger fringetree branches scheduled for analysis.

Cipollini recently received a grant from the U.S. Department of Agriculture’s Animal and Plant Health Inspection Service to continue his research. That research has resulted in a whole host of questions, the answers to which he is hotly pursuing.

Will emerald ash borers feed on the leaves of the fringetrees enough to fully develop to a reproductive stage? What is the role of environmental stress in attack? What percentage of larvae makes it through to adulthood? What about the chemistry of the trees makes them vulnerable to attack? What is it about the Chinese fringetrees that makes them resistant? What other species are at risk?

Cipollini’s next academic paper on emerald ash borer and fringetrees, with student Chad Rigsby as a co-author, is published in Environmental Entomology, a journal of the Entomological Society of America. Their research is also featured on the society’s website, Entomology Today.

“I feel like I’m an emerald ash borer whisperer these days,” Cipollini said. “When I show up, there is suddenly an emerald ash borer problem in the white fringetrees. Short of finding adult exit holes, it can be easy to miss the signs that trees are infested or have been attacked in the past.”