She sees Cinderella stories every day, but there is one she will never forget.

A young mother from an abusive relationship had just put on an outfit she hoped would help her land a crucial, life-changing job. But she could not bring herself to look in the mirror. Her head was bowed and eyes fixed on the floor.

Paula Cosby decided to give the woman a little space. When the woman finally summoned the courage to peek at the mirror, that’s when the magic happened.

“She looked magnificent,” Cosby recalled. “She said, ‘I never thought I would ever look like this. I never thought I could be somebody. But now I see what people have been telling me, and I know I can do this.’”

Cosby, a Wright State University alumna, has watched this happen time and time again as executive director of Clothes That Work, a Dayton nonprofit that provides interview-appropriate clothing and confidence-building coaching to under-resourced jobseekers.

“How you dress affects and impacts how you are perceived,” Cosby said. “Our jobseekers report consistently that they feel more confident to be able to demonstrate their skills. Something transformational happens for them when they are dressed professionally.” 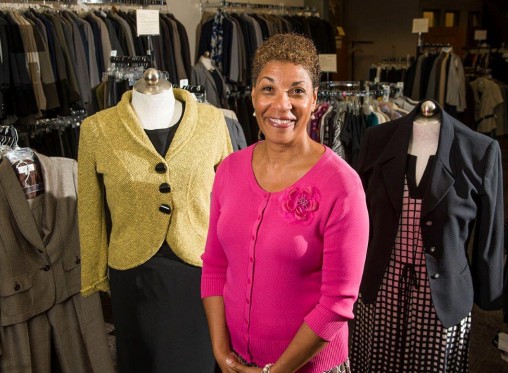 Clothes That Work is tucked into The Job Center, a sprawling one-stop employment and training complex. The nonprofit was founded in 1998 when a group of community-minded businesswomen decided to help single mothers get jobs by providing them with professional clothing. They called upon their friends to donate professional outfits from their closets.

The organization has gone from serving 250 women in its initial year to nearly 1,800 women, men and young adults. Over the years that amounts to nearly 25,000 jobseekers, who have been hired in the automotive, manufacturing, hospital and other service industries.

The donated clothing is either brought directly to Clothes That Work or dropped off at locations around the community. Last year, nearly a quarter million items of clothing were donated.

Inside the facility, racks of dresses and suits line the walls. Conservative blacks and grays dominate, but there is a sprinkling of beiges and powder blues. Newly arrived donations of shoes and purses fill blue plastic storage containers. Shopping carts overflow with stacks of shirts, demonstrating the outpouring of support from the community.

Clothes That Work also operates a resale boutique, which generates revenue for operations and programming.

An interview outfit as well as three to four go-to-work outfits are free to qualified jobseekers, who must live at or below the poverty level or be dependent on public services.

“It helps them to stretch their resources so that their initial paychecks aren’t allocated to clothing,” Cosby said. “Once they are stabilized and have been on the job for a period of time, they can come back and shop at our boutique that is open to the public and get quality professional clothing for a reduced price.”

Clothes That Work is also in the process of developing a series of workshops that will help jobseekers with soft skills — understanding how to communicate like professionals, how to behave professionally in a business environment and how networking can expand their opportunities for success.

Cosby grew up in Columbus, Ohio, the daughter of government workers and graduated from Bishop Ready High School. She got her bachelor’s degree in psychology from the University of Dayton and moved to Atlanta, where she worked as a mental health therapist in crisis counseling.

“I find people very interesting, very intriguing,” she said. “Psychology was a way for me to understand some of the thought processes behind behaviors. I also have a very strong passion for supporting the development of healthy families. So my intent was to become a child psychologist and family therapist.” 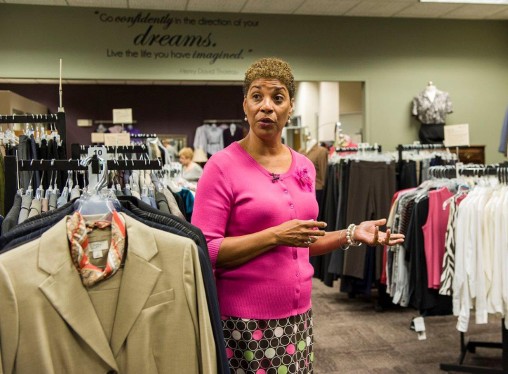 Under Paula Cosby’s leadership, Clothes That Work has grown to serve nearly 1,800 women, men and young adults a year and receives almost a quarter million donated items of clothing annually from the community.

Cosby met her husband of 29 years, Keith, by chance at an Atlanta train station following a Reds versus Braves baseball game. The couple married a year later and settled in Dayton, where he was working as a physical educator with Dayton Public Schools. Cosby initially worked for a time in the corporate world.

“I really felt like I was missing something. I had taken a total departure from mental health and started getting involved in administration,” she said. “I just didn’t have all the things in my job that my heart needed to be fulfilled.”

So Cosby returned to the nonprofit arena and began to work with the City of Dayton and community partners to support the revitalization of the Wright-Dunbar Historic District.

During this time, Cosby began pursuing her master’s degree in public administration (M.P.A.) from Wright State.

“I cannot begin to tell you the difference that it has made in terms of my own awareness and professional growth,” she said. “There is a large level of respect that Wright State University has, especially their M.P.A. program.”

Cosby says the program’s strength lies in its ability to work alongside community leaders and organizations to make positive public impacts.

She said she decided to attend Wright State because of the university’s desire to strengthen the local community by providing practical, hands-on experiential learning opportunities for graduate students.

“The opportunity to earn a certification in nonprofit leadership while earning a graduate degree was the icing on the cake,” she said. “Not only was I able to receive a top-notch degree, I was also able to focus my academic emphasis on the nonprofit field.”

Cosby, who got her degree in 2012, said the program inspired and taught her how to impact public policy and make lasting changes in the community and people’s lives. She has been named Outstanding Nonprofit Professional by the Wright State Nonprofit Leadership Alliance chapter.

“That was the beginning of a true love affair,” she said. “I really became charged and enamored by what I saw that they did and how they impacted individuals’ lives. They were helping to build community at its very core.”

A year later Cosby was hired as the chief development officer and in 2013 became executive director.

Clothes That Work is staffed by volunteers, but Cosby herself is often on the floor.

“I really enjoy interacting with our jobseekers,” she said. “I think it’s important to stay grounded in why I do what I do.”

“When you talk to her, you know she believes that this is going to make a difference in somebody’s life,” Rinehart said.

When she isn’t working, Cosby is involved in childhood literacy and reads to children in libraries and at a local elementary school. She is also a trivia buff and even competes on a trivia team.

“I plan my dinner meal times around ‘Jeopardy,’” she jokingly says.

But Cosby’s true passion is Clothes That Work. And she says the magic spot inside the nonprofit is in front of a mirror, which fires her passion.

“I don’t understand what happens, but this mirror comes to life when it has an opportunity to reflect the image of a jobseeker,” she said. “You see it come alive in her face. You see the confidence begin to exude. It’s indescribable. And that’s what brings me joy coming in to work every single day.”