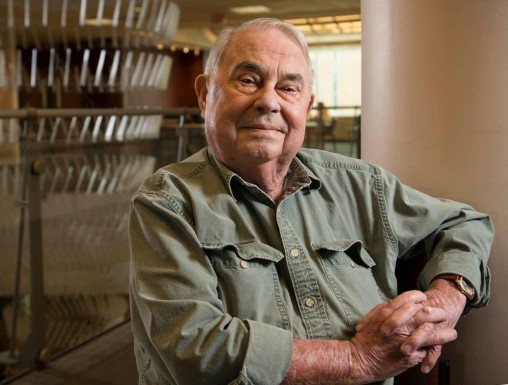 Retired social work professor Bela Bognar was honored by his native Hungary for raising scholarship money for Hungarian students. (Photo by Will Jones)

Retired Wright State University professor Bela Bognar, who has worked tirelessly over the years to raise scholarship money for Hungarian students, has received the Knight’s Cross of the Order of Merit, one of Hungary’s highest state honors.

The award is bestowed upon academics, writers, poets and scientists who contribute the most to advance Hungarian causes. Bognar’s award medal was picked up in Budapest, Hungary, in August by his nephew.

Bognar taught social work at Wright State for nearly 30 years before retiring in 2002. During his career, he raised money for Hungarian students, churches, boarding schools and agencies that help abuse victims.

“I wrote letters to all of the people who donated money for the scholarship fund over the years and said, ‘This award is yours. Without you, I couldn’t have gotten it,’” Bognar said.

Bognar was born in Hungary and lived through the Soviet occupation of the 1940s and ’50s, when the Soviets confiscated his family’s 10-acre farm. He was an active participant in the Hungarian Revolution of 1956, a spontaneous nationwide revolt against Soviet-imposed policies.

Bognar was with a group of university students who confiscated arms from an army weapons warehouse and took part in 10 days of bloody, block-to-block street fighting.

“The saddest part was that I witnessed young people killed,” he said.

Despite its failure, the uprising was highly influential and foreshadowed the downfall of the Soviet Union.

After the revolution, Bognar left Hungary for Belgium and later emigrated to the United States.

He attended the University of Wisconsin, where he obtained master’s and doctorate degrees in social work, gerontology, health and mental health policies. Bognar taught a generation of professionals who worked in the field of aging. He wrote four textbooks and countless articles on health and aging policies.

The 85-year-old Bognar, who lives in a 150-year-old schoolhouse in rural Miami County, says people are generally afraid of growing old and the physical miseries that can come with it. He says family and community support is a huge comfort.

“The problem is that chronic illness is bugging the hell out of us,” he said. “You have to live with it and preoccupy your mind with something.”

Bognar started the Hungarian Scholarship Fund in 1998 after he and his wife, April, received a compelling letter from an Hungarian student in Transylvania who needed $950 to attend a teachers’ college in Hungary.

It was later renamed the Dr. Bela J. Bognar Hungarian Scholarship and is for students of Hungarian origin who attend Wright State. To date, $25,365 has been given to 47 students.

Michelle Streeter-Ferrari, director of Wright State’s University Center for International Education (UCIE), said the scholarships support Wright State’s mission of creating an inclusive and diverse campus that includes students from around the world.

“UCIE is thrilled to have been part of an effort to recognize those students of former immigrants who have helped make our region stronger,” she said.

In 1999, a separate Bognar Family Scholarship Fund was established by the Bognars. It provides monthly financial assistance to qualified university students of Hungarian origin studying in Hungary, Romania, Ukraine, Slovakia, Serbi and the United States.

Since its inception, more than $500,000 has been raised from members of the Hungarian-American community, churches, organizations and the Sunshine Lady Foundation, directed by Doris Buffett. As of June 2013, the fund had awarded scholarships to 152 students — 14 of whom had earned doctorates or degrees in medicine and law.

And what’s Bognar going to do with his new medal?

“I’ll probably store it in the garage with my other awards,” he quipped.