The student dons a red and blue skullcap studded with electrodes. She sits before a monitor inside a sealed chamber as images of human faces, motorcycles and church sanctuaries flash before her eyes. Just outside, researchers are locked into her brain waves, which light up their computers.

Cognitive neuroscience is an academic field that addresses the relationship between the brain and behavior through perception, memory and attention.

The lab, housed on the fourth floor of Fawcett Hall, was built by Assaf Harel, assistant professor of psychology and a cognitive neuroscientist, who studies how the brain uses visual images to extract information about the environment and make sense of the world.

“We are visual animals,” said Harel. 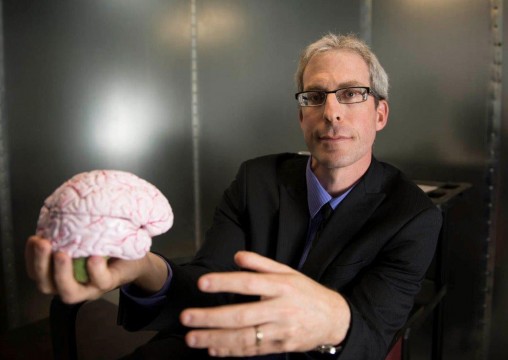 Assaf Harel, an assistant psychology professor and cognitive neuroscientist at Wright State, has built a pioneering lab to probe how the brain processes visual images. (Photos by Will Jones)

Harel received his doctorate in cognitive neuropsychology from the Hebrew University of Jerusalem (Israel), where he studied expertise in visual object recognition. He did postdoctoral work at the National Institute of Mental Health, studying visual recognition using functional, cutting-edge MRI analysis techniques. He joined the faculty at Wright State in 2014.

Harel is directly recording brain measurements, which has the great advantage of not having to rely upon verbal reports of the subjects, which can be biased.

“Extracting meaning from the environment is a very difficult computational problem,” he said. “If you have a computer trying to understand the world — trying to have the rich experience that we have and make fine discriminations we can make — it’s going to fail dismally.”

But a computer can be programmed to focus on how visual images affect brainwaves. An electroencephalogram (EEG) is used to track and record brain wave patterns through electrodes placed on the scalp that send signals to the computer.

The chamber in the lab is plated with metal designed to filter out any electrical frequencies or interferences that could hamper the recording of data. Brain responses measured by the 64-electrode cap stream through an amplifier and a fiberoptic connection enroute to a bank of computers that display the EEG waves.

“It’s noninvasive and a direct measurement of the brain activity,” Harel said. “It has all of the great advantages of studying the relationship between the brain and behavior.”

“What I think we will reveal is that vision is a very interactive process — where what you think, what you expect, what you need to do with the visual information actually constrains and leads you to particular interpretations,” Harel said. “You don’t see with your eyes. We’re not cameras. We’re actually cognitive agents, and we’re actually seeing with our brains.” 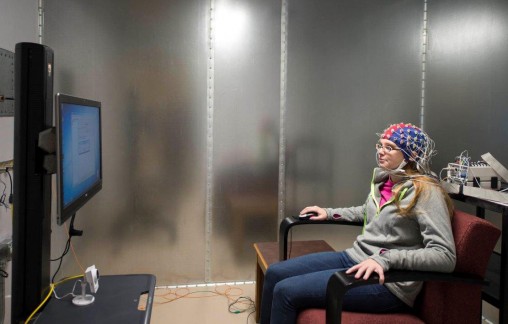 The images not only include faces, but landscapes such as mountains, beaches and forests and objects like motorcycles and roller skates. Some of the images are upside down.

“Things have a particular structure, and if you invert them you mess around with that structure,” Harel said. “You are going to have a harder time memorizing the face and responding to it. The question is whether that causes a difference in the brain waves.”

Results of the research could potentially be used to address attention deficits.

“You could really hone in and focus on particular markers of attention, then ask what particular aspects are impaired,” he said. “You could also use it as a training tool and enhance attention.”

For example, a UAV operator whose cognitive abilities are eroded by long hours could be prompted to refocus if an EEG detected flagging attention.

The new lab will be shared with any Wright State college or department such as engineering, science, math and medicine that need EEG data for their research.

Kathrin Engisch, interim dean of the College of Science and Mathematics, called the lab a “fantastic opportunity” for the entire university.

“It’s wonderful for the number of students who are going to be able to see something like this,” Engisch said. “We have never had anything before like this. It sets us apart from most of the universities around us. We’re proud of that.”