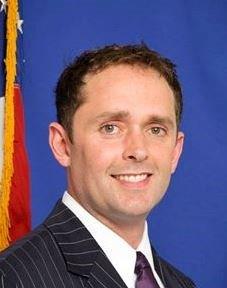 The whole career thing started out working for a paper manufacturer. Then a chance assignment in Europe led him into a whole different world — a seismic change.

Today, Wright State University alumnus Jeff Austin is riding high in a diplomatic career. After assignments with the U.S. Department of State in Mexico, Saudi Arabia and the central Asian country of Tajikstan, he currently coordinates U.S. policy on political issues in the United Nations Security Council.

Along the way Austin helped Arizona and the Mexican state of Sonora return to a working partnership in the wake of fallout from Arizona’s immigration law. And he served as a logistics officer for President Barack Obama’s meeting with Russian President Vladimir Putin on the margins of the G20 economic summit in Cancun, Mexico, in 2012.

“Every time I have received the president or the secretary of state, I get a beaming sense of pride when I see the blue and white plane emblazoned with ‘The United States of America’ touch down or take off,” Austin said. “That was especially true at a big multilateral event like the G20.”

Austin attended school in Worthington, Ohio, through ninth grade and finished the final three years of high school in Springfield. His father owns car dealerships in Bellefontaine, and his mother is retired as a radiation therapist at Riverside Hospital in Columbus.

Austin attended Wright State, graduating with a degree in human resource management and a minor in psychology.

“Wright State has so many special things about it that contributed to my success,” he said. “First, the teachers and administrators were very engaged with the individual students. Also, I was able to take leadership roles in several student organizations.”

For Wright State students who may want a similar career, Austin suggests taking on such leadership roles.

“Also, think big — REALLY BIG — about all the things you want to accomplish or explore in life, and base your activities, relationships, studies and job search on things that can facilitate that for you,” he said. “Always put yourself in the path of a potential opportunity. Sooner or later it will come.”

After graduating from Wright State in 1998, Austin obtained his master’s degree in human resources management from the University of South Carolina. Then he got a job with International Paper, where for the next 10 years he would mostly manage human resources at paper mills in the southeastern United States.

Then came that fork in the road.

Austin was put on a project to combine the company’s Eastern and Western European operations and for 18 months was stationed in Belgium and Paris.

“That made me fall in love with living overseas, so in 2009 I joined the Department of State as a diplomat,” he said.

His first assignment was Dushanbe, Tajikistan, even though he could have put in for Rome.

“I had to Google Dushanbe to find out where it was. But after doing some research on it, my wife and I felt it was exactly the type of adventure we were looking for,” he said. “While Rome is my favorite city in the world, I knew I would probably never get to Tajikistan without the State Department sending me there, so we chose the road less traveled.”

In Tajikistan, Austin managed human resources for the U.S. Embassy. In Mexico, he was in charge of political, economic and public diplomacy for the U.S. Consulate. In Saudi Arabia, he worked on consular issues — vetting Saudi visa applicants and assisting American citizens in need.

“One of the greatest things about this job is the opportunity to try new things every few years,” he said. “While this is exciting, you need to learn a completely different skillset. I enjoy that, but it is certainly a challenge.”

Austin’s love for travel has enabled him to run with the bulls in Pamplona, Spain, see the Pope celebrate Mass at the Vatican and attend the Cannes Film Festival in France. He has also run 26 marathons and a handful of triathlons.

Austin is currently a multilateral affairs officer and coordinates U.S. policy on political issues in the U.N. Security Council involving Asia Pacific, the Western Hemisphere, Iran, North Korea, Non-Proliferation and Atrocity Prevention. He supports the U.S. delegation to the U.N. in negotiations on U.N. Security Council resolutions, statements and other documents.

“In this career you represent America in everything you do when you are overseas — the way you treat people on the bus, the way you handle problems and the way you navigate other cultures,” he said. “I like that role. I like helping people see the good in America.”