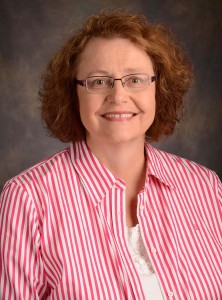 Sherry Farra, assistant professor in the College of Nursing and Health and curriculum director of the National Disaster Health Consortium.

The tiniest detail is represented. Blueprints were used to precisely capture the hallways and stairways. Modeling was used to reproduce the cribs and intravenous pumps. Even the textures of the walls are exact.

It’s the neonatology intensive care unit at Cincinnati Children’s Health Medical Center. And it has been reconstructed in the world of virtual reality for a unique research project being led by Sherry Farra, an assistant professor in Wright State University’s College of Nursing and Health.

Virtual reality is a computer-simulated environment that can replicate physical presence in places found in the real world or imagined worlds. It can recreate sensory experiences, including virtual sight, sound and touch.

Farra and fellow researchers are studying whether virtual reality training can be an effective and alternative way to prepare people to evacuate newborns from an intensive care unit during an emergency.

With their fragile patient populations, hospitals are very vulnerable in disasters. For example, in May 2013, a tornado ripped through the Moore Medical Center in Oklahoma, forcing the hospital to move 30 patients.

“Disaster events are high risk, but low volume; they don’t happen often, but when they do, there is a lot of risk involved,” Farra said. “Both the Joint Commission accrediting organization and the Centers for Medicare and Medicaid Services require staff training to respond to a disaster.”

Farra received a three-year grant of more than $730,000 from the Agency for Healthcare Research and Quality, which is part of the U.S. Department of Health and Human Services.

She is collaborating with researchers from the University of Cincinnati and Miami University and with physicians and staff at Cincinnati Children’s Health Medical Center. The hospital has a large neonatology department and a 55-bed Level IV newborn intensive care unit (NICU).

Traditionally, training is done through live exercises, with the staff conducting pretend evacuations. It can be costly and usually involves only a small fraction of the staff, who happen to be working at the time. Virtual reality would enable the entire staff to be trained.

“There are not that many studies that have looked at the psychomotor skill of preparing a baby for transport,” Farra said. “Nurses have to prepare the baby, use evacuation baskets, go in the right direction, take the right equipment. They need to practice all of those skills.”

Farra said there is not a lot of information in the literature about how to build a virtual reality simulation. She herself had to develop the storyboards, which identify images that are displayed in sequence for the purpose of visualizing an actual event.

Hodgson said the level of immersion and interactivity is great. “We went to a lot of effort to take pictures of the walls and the signage just to make it a very familiar environment,” he said.

Participants will wear a visor-like, head-mounted display and use hand controllers to manipulate, interact with and move around in the environment and go through an evacuation procedure.

Newborns in intensive care are fragile and vulnerable.

“They are very low weight, they are at risk for hypothermia, and a lot of times they have respiratory and fluid needs,” Farra said. “If the baby is supposed to be hand ventilated on the stairway during an evacuation exercise, with the use of neonatal simulators we can actually document if the neonates have been ventilated at the appropriate rates.”

Farra will measure the outcomes of her research by holding an exercise prior to and then after the training to see if there is an improvement in performance. The performance will be compared to that of a control group that will undergo traditional training, not virtual reality.

“In virtual reality, there’s no place to hide; every movement is tracked,” she said. “It gives the participant immediate feedback.”

“That has to do with that whole theory of situated cognition — you learn it and then you do it,” Farra said. “Because nursing is a practice profession, we build on that learning by doing. In the virtual environment, the participant is actually doing things.”

The study will take more than a year. Sherrill Smith, associate professor and assistant dean of undergraduate programs in the College of Nursing and Health, and Farra also recently received a grant from the National League for Nursing to continue virtual reality research that involves students using controllers to decontaminate a site.

“I think there is a lot of opportunity for training,” she said. “There is a huge movement to put education online and make it accessible.”

Farra grew up in Michigan and got her bachelor’s degree in nursing from Wayne State University. She obtained her master’s degree at Wright State as a clinical nurse specialist in adult health and her Ph.D. in nursing with a focus on scholarship of teaching and learning from the University of Cincinnati.

Farra became interested in virtual reality when she started playing video games with her son.

“I’m good at it,” she said. “I’m a kinetic learner so it makes really good sense that I do well in virtual simulation. Someone who is predominantly an auditory learner, I’m not so sure if they would like it as well.”

Farra’s doctoral dissertation examined the effects of triage training on nursing students in Second Life, an online virtual world. Her study found that students who trained in Second Life retained information longer when compared to those who went through traditional learning methods.

Dean Mainous, an expert in newborn care, is a consultant on the grant. “Dr. Farra’s leadership in this arena means that in the future we will save babies’ lives,” said Mainous. “You can’t measure that kind of impact.”

In addition to teaching at Wright State, Farra is a research consultant to the chief nurse of the American Red Cross and serves as a Red Cross regional nurse leader for the Dayton and Cincinnati regions and on the Clinton County chapter’s board of directors.
Farra feels that with the knowledge and expertise at the university, there is a golden opportunity for it to become a pioneer in virtual reality research.

“I’d like to see Wright State be a leader,” she said.