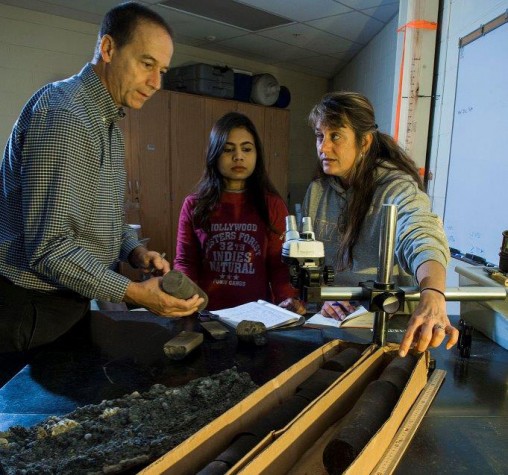 From left: David Dominic, chair of the Department of Earth and Environmental Sciences, and graduate student researchers Ritu Ghose and Jami Moore are part of a Wright State team investigating the effectiveness of trapping greenhouse gases underground. (Photo by Erin Pence)

The success of national efforts to reduce greenhouse gases and global warming by injecting carbon dioxide into underground reservoirs may hinge in part on a team of Wright State University scientists.

A research team from the College of Science and Mathematics’ Department of Earth and Environmental Sciences has won part of a $10 million U.S. Department of Energy grant to advance the scientific understanding of geologically sequestering carbon dioxide.

Geosequestration of carbon dioxide is one strategy for reducing greenhouse gas emissions into the atmosphere. In this strategy, CO2 from industrial emissions is captured and pumped into deep geologic formations, typically brine reservoirs more than a mile underground. The CO2 is then trapped beneath an overlying shale formation, which serves as a cap on top of the reservoir, as well as by the sandstone surrounding the brine below. The CO2 slowly dissolves in the brine and mineralizes.

The project began in August 2014 as a newly created Energy Frontier Research Center (EFRC), which is funded by the energy department’s Office of Basic Energy Science. This center is referred to as the GSCO2 (Geologic Storage of CO2) EFRC.

“DOE is putting money into this because geosequestration is one of the strategies that might make a relatively large contribution to addressing the problem of rising atmospheric CO2 levels,” said Robert Ritzi, professor of earth and environmental sciences.

The Wright State researchers are focusing on trying to understand how the structural differences — or heterogeneities — in the sandstone affect the trapping of the CO2.

The sandstone consists of both coarser and finer grain beds juxtaposed together. The flow and trapping of CO2 is largely controlled by capillary forces arising from the size of the pores between the grains, and the contrast in surface tension between the brine and the CO2.

Redundancy in physical storage mechanisms is desirable because it adds factors of safety to permanent CO2 storage.

Naum Gershenzon, senior research scientist, constructed digital models of the geologic architecture of the reservoirs and used the Ohio Supercomputer Center to conduct simulations of CO2 injection and flow within the reservoirs and study the trapping processes. For this work, the Wright State group is working in close collaboration with researchers at the Illinois State Geologic Survey.

Gershenzon said the Wright State research group has developed a model with sophisticated software that enables scientists to study the heterogeneity in a more geologically realistic way.

In order to make the digital model more realistic, graduate student researcher Jami Moore went to Missouri to study surface outcrops of sandstone. And graduate student researcher Ritu Ghose will conduct a statistical analysis of samples and data from the Mount Simon reservoir in Illinois, at the location of a pilot project in which 1 million tonnes of CO2 has now been emplaced.

David Dominic, professor of earth and environmental sciences and department chair, said the goal of the research is not to find specific sites in which to inject CO2, but to evaluate the important general properties of reservoirs and understand the processes that are taking place.

“We believe that the idealized reservoir that we’re using in the flow simulations has more realistic characteristics, realistic heterogeneity,” said Dominic. “In addition, we have very sophisticated flow-simulation software that was previously donated to the department by Schlumberger Limited.”

The researchers have already published several articles on their preliminary results.

“The results encourage us to move forward in the next three years to expand our investigation,” said Ritzi.

The grant is administered by the University of Illinois. The GSCO2 EFRC facilitates collaboration among many scientists from among the GSCO2 partner institutions, which include Wright State, the Illinois State Geological Survey, the University of Notre Dame, the University of Southern California, the University of Texas, the National Energy Technology Laboratory, the Schlumberger oil and gas corporation and two Norwegian research foundations — NORSAR and SINTEF.