Martin Luther King Jr. Week was celebrated at Wright State University with a campus march that honored the civil rights leader’s principles of nonviolence while unleashing a wakeup call to action against oppression in today’s society.

The Jan. 19 march — which took the theme “Are We Still Dreaming?” — began at Millett Hall and featured stops at the Bolinga Black Cultural Resources Center, the Women’s Center, University Hall, the Student Union and Dunbar Library.

”What are we doing right now to make sure that dream becomes reality?” said march leader William Barabino, a senior from Toledo majoring in organizational leadership.

King, a clergyman, activist and prominent leader of the African-American civil rights movement, received the Nobel Peace Prize for his efforts to end racial discrimination and was known for his “I Have a Dream” speech. He was assassinated in 1968. In 1986, Martin Luther King Jr. Day was established as a federal holiday. 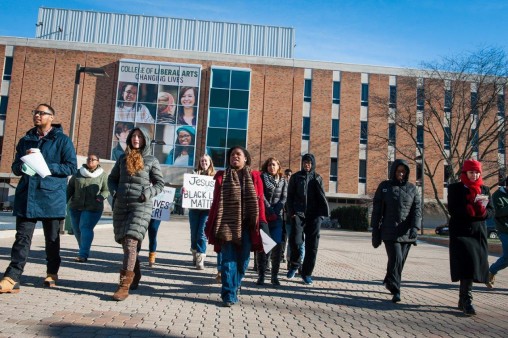 The marchers at Wright State — who included students, faculty, staff and others — tore into meaty issues during stops along the way. They spoke out against violence against women, Muslim Americans, LGBT and African-Americans. The marchers included two representatives of the Family Violence Prevention Center of Greene County.

“We live in a society today that is more segregated than it was when we made a law to desegregate schools in 1956,” said Christa Agiro, associate professor and co-director for the Language Arts Program in the College of Education and Human Services. “We know that this natural segregation is happening, and we want to fight against it. It’s going to take a lot more than just hoping and wishing.”

The marchers carried signs reading “Black Lives Matter” and chanted: “What side are you on, my people? We’re on the freedom side.”

Agiro told her fellow marchers that the nonviolent response to oppression must get smarter and smarter every time to match the shifting face of oppression.

“It takes constant study, constant reflection, constant innovation to get ahead of the way that oppression is changing,” she said.

MLK Week will conclude with a screening of “Letter from Birmingham Jail” on Wednesday, Jan. 20, at 3 p.m. in the Millett Hall Atrium.

King wrote the letter on April 16, 1963, defending nonviolent resistance to racism. It became an important text for the civil rights movement.

The screening will include a discussion using nonviolence action to change unjust laws. It will be led by Tracy Snipe, associate professor of political science.