His great-great grandfather fought in the Civil War and later plunged to his death in downtown Dayton after falling through a bridge scaffolding. His grandmother played host to seven or eight relatives who slept in her dining room for months to escape Dayton’s historic 1913 flood.

These were some of the family stories Brady Kress grew up hearing. So it’s no wonder the history of Dayton has such a firm grip on his heart.

Today, the 1996 Wright State University graduate is president and CEO of both Carillon Historical Park and Dayton History, organizations that preserve and display some of the city’s most precious historical treasures.

Kress along with Carillon Historical Park and the Montgomery County Historical Society not only helped create Dayton History, but in the past 13 years has expanded its reach and grown its exhibits. 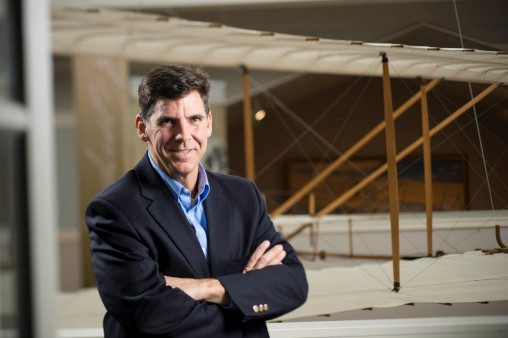 The nerve center of Dayton History is Carillon Park, a 65-acre history museum that is home to the world’s first practical airplane and other historic artifacts from Dayton’s past. The park had a record 257,670 visitors last year, a 27 percent increase from the previous year.

“Carillon Park will never be finished. We’re always finding stories; we’re always expanding and growing,” said Kress, who was hired as the park’s executive director in 2003. “At the end of the day, we want all of our guests to feel proud of where they come from.”

Kress is a fifth-generation Daytonian, his family arriving in 1841. He grew up in Centerville, the son of a mother who was a nurse and father who had a 35-year career in international sales at NCR Corp.

Kress became interested in history as a young boy after being dazzled by his grandmother’s stories. In high school, that interest focused on skilled trades of the 18th and 19th centuries.

“I think I was the only one at Centerville High School who had a collection of woodworking hatchets,” he said. “I built my own forge in the backyard, making tools and making furniture.”

In 1988, at age 15, Kress landed a job at Carillon Park as a guide. He later became a guide supervisor and did trade demonstrations.

“I was out here in costume doing blacksmithing and all kinds of different trades,” he said. 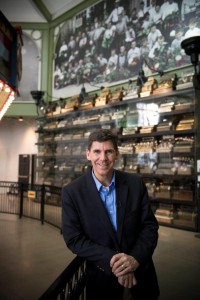 Brady Kress in front of a display of NCR cash registers.

The land upon which Carillon Park sits was created when 300,000 cubic yards of soil were brought in after the levees were built to contain the Great Miami River. The property was originally used by NCR as the company’s shooting range. The crowning feature of the park is Deeds Carillon, the 151-foot tall limestone carillon tower with 57 bells, erected in 1942.

“The way to make college not just four more years of high school is to make it a time to grow up,” said Kress. “And part of a college education should be to figure out how you’re going to pay for it.”

Kress began his college career as a business major and then switched to political science, where he studied the history of politics and presidential history. In 1994, the Department of Political Science gave him the freedom to create an internship for himself on Capitol Hill with Congressman Carlos Moorhead, a Republican from California.

“I was the only intern there and was really one of the legislative assistants,” he said. “I was going to briefings. I was having lunch with returning astronauts. I was really part of the staff. It was amazing.”

Kress graduated in 1996 with a bachelor’s degree in political science and minor in history. He took a job with the industrial supply company for which he had worked as a driver during his final years of college and moved to Indiana to take on his new position, which was in sales.

But Kress found that his love of history was tugging at his heart. He would regale excavating and plumbing contractors with his knowledge of history and would schedule business meetings at museums and historic sites.

So in 1999, Kress took a job with the Historic Landmarks Foundation of Indiana, the country’s largest statewide historic preservation foundation. He managed a series of museum properties around the state and was later elected president of the Association of Indiana Museums.

In 2003, Kress was hired as executive director of Carillon Historical Park. Two years later, Dayton History was born, an umbrella organization with the park as its main campus.

Charged with collecting, preserving, interpreting, presenting and promoting the region’s past, Dayton History also consists of Hawthorn Hill, Patterson Homestead, the Paul Laurence Dunbar House, the Old Court House, Memorial Hall, the Archive Center and Carillon Brewing Company. It also operates the National Aviation Hall of Fame’s Learning Center and is creating a new museum at the former Mound Laboratories in Miamisburg, where triggers were made for nuclear bombs during and after World War II.

In addition to exhibits, Dayton History conducts educational programs and workshops. About 250,000 visitors a year visit its sites, including students from 22 surrounding counties.

“At that time there were a number of historic structures around the region that were endangered and were going to be lost,” Kress recalled. 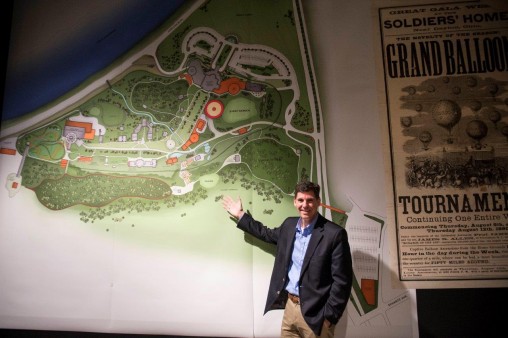 The nerve center of Dayton History is Carillon Park, a 65-acre history museum that is home to the world’s first practical airplane and other historic artifacts from Dayton’s past.

Moved to Carillon Park was the last remaining sales cabin of Sugar Camp, a training facility for NCR salesmen that during World War II hosted Navy Waves tasked with codebreaking; all of the buildings from the Kettering Moraine Museum, including the original Deeds barn; and even a locker room from the Dayton Triangles, an original franchise in 1920 of the American Professional Football Association, now the National Football League.

“The locker room had multiple holes in the roof. It was rotting away. It was filled with straw and fertilizer,” Kress said. “We were able to save it. We restored it and stopped the bleeding.”

Under Kress’ direction the Great Dayton Flood of 1913 building was expanded to twice its size. And the Heritage Center of Dayton Manufacturing and Entrepreneurship was created.

At the center, visitors are bombarded with the sights and sounds of yesterday.

In one display, 81 gleaming NCR cash registers stand like ranks of soldiers. Video screens flash historic black-and-white photos of airplanes, canal boats, businesses, farm fields and even drive-in theaters. And there is a full-scale, operating carousel.

Over the next 10 years, Dayton History plans to largely focus on Dayton’s transportation history, presenting exhibits on the National Road, Miami and Erie Canal, lighter-than-air aviation and rail history.

The park currently has America’s oldest built steam locomotive. And then there is the crown jewel — the original 1905 Wright Flyer III, the world’s first practical airplane.

“This is THE plane the Wright brothers flew around Huffman Prairie,” Kress said. “It is the only airplane designated a National Historic Landmark.”