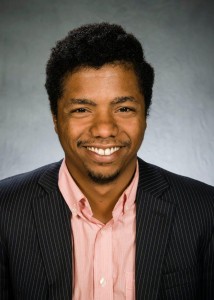 Understanding his family heritage sparked a passion for Arabic in Joshua Mabra, assistant professor in the Department of Modern Languages.

It’s become part of the soundtrack at Wright State University. You hear it in the Student Union, the cafeterias and the corridors of Millett Hall and Russ Engineering — Arabic.

And no one could be more excited about the growing use of — and interest in — Arabic than Joshua Mabra, assistant professor of Arabic in the College of Liberal Arts’ Department of Modern Languages.

In fact, it was the excitement on campus for the growing Arabic program that drew Mabra to Wright State in 2014.

“Due to its location and the large population of native speakers of Arabic at the university, I strongly believe that Wright State could become a major center for the study of Arabic, and I couldn’t resist being part of its future,” he said.

Mabra began studying Arabic in 2002 and has studied the language in Lebanon, Syria, Sudan and Egypt.

Classical Arabic texts are Mabra’s passion, from the Quran to seventh century papyri and graffiti to the first Arabic histories. He loves the formative period of Arabic literature when the tradition of prose and historical writing were in their early stages.

“What fascinates me is the process of community building and identity creation that goes along with the early development of Arabic literature,” he said. “These earliest works not only represent the development of a literary tradition but also reflect the formation of Islamic civilization.”

Born in Springfield, Ohio, Mabra became interested in Arabic after learning the history of his family, who migrated to Ohio in the 1940s.

“I grew up hearing from my great aunts that our family had come from Sudan before being enslaved in the American South,” he said. “With so much of my family’s history and culture lost due to slavery, I was very much inspired to recapture a part of this lost history, and learning Arabic was part of that process.”

Mabra obtained his bachelor’s degree in anthropology from Kenyon College in 2005. He moved to the African nation of Sudan, where for two years he worked for an English-Arabic newspaper, the Juba Post.

Mabra was dazzled by the Sudanese capital of Khartoum, which sits on the confluence of the Blue and White Nile rivers and has a mix of Ottoman, British colonial and traditional Sudanese architecture and displays great human diversity.

Mabra’s research focuses on the great religious and cultural changes of the Late Antique and early Islamic periods. He is particularly interested in the intertextuality of Arabic, Coptic, Syriac, Ethiopic and Greek texts.

“To practice Arabic, students just need to walk the halls and pathways of the campus,” Mabra said. “Just go hang out in the Hangar or Student Union with your Arabic book, or say ‘Salam’ to someone you hear speaking Arabic.”

Mabra said there is a great shortage of Americans who have a knowledge of Arabic and Middle Eastern culture.

“Students who combine studying Arabic with other skills have a great opportunity to work in the very lucrative and expanding markets of the Middle East,” he said. “Studying a language like Arabic could give students studying history, politics, business, engineering, medicine, the sciences or those in ROTC great career opportunities in both the private and public sectors.”