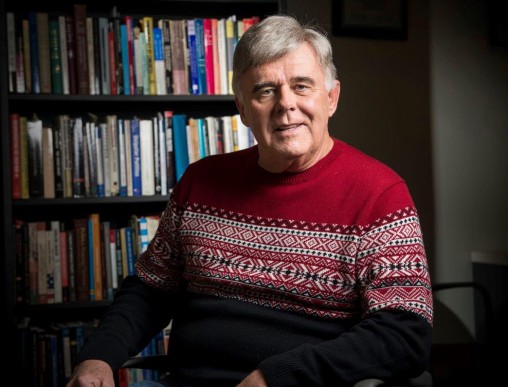 Political science instructor Paul Leonard says students are more interested in politics because they have a greater understanding of the influence government and politics play on careers they pursue. (Photo by Erin Pence)

As the presidential primaries unscroll and the presidential debate at Wright State University looms, the classes of political science instructor Paul Leonard are packed with suddenly interested students.

Leonard’s 2016 Presidential Election class, which covers the primaries and caucuses, has 35 students. There are 40 students in his American Politics class, and the Honors version of that class is full.

“The interest has been amazing — from kids who have absolutely no political background,” said Leonard.

In the fall, he will also teach a class called Political Parties, covering their strategies and agendas.

Leonard believes interest has been building in recent years because college students have a greater understanding of the strong influence government and politics play on careers they are pursuing, whether it be in education, medicine or other livelihoods.

“I see kids waking up and seeing that politics and government affect every walk of life,” he said. “I see a renewed interest.”

Leonard should know. He’s been in politics for much of his life.

He served as lieutenant governor of Ohio from 1987 to 1991. Prior to that, he was elected four times to the Ohio General Assembly and served as mayor of Dayton. At the time, he played the electric guitar and was sometimes referred to as the Rock ‘n’ Roll Mayor of Dayton.

In addition to teaching at Wright State, Leonard practices law in Dayton. He founded the Center for Animal Law and Advocacy, a legal team that advocates for harsher penalties for those who mistreat animals.

Wright State is hosting the first presidential debate, on Sept. 26. The debate is expected to be in the national and international spotlight and attract thousands of media members.

Leonard said offering to host the debate was a smart move by Wright State given Ohio’s electoral importance. And southwest Ohio has the reputation of being a bellwether region — reflecting a cross-section of the U.S. electorate — in a swing state.

Leonard said the current election campaign is different than any he has ever seen because the candidates are more independent — making their own decisions and speaking out on issues without consulting party leadership.

One reason, he said, is because candidates are less reliant on the financial backing of the parties. They are relying on their own money or that of political action committees.

“Political parties are becoming less relevant,” he said. “They have less control over the candidates.”

He said the death of U.S. Supreme Court Justice Antonin Scalia changes the issues agenda “dramatically.” Leonard changed his whole class lesson plan because of it.

“The vacancy is going to be a rallying cry for all of the candidates to get their people out,” he said. “I think it’s going to be talked about on the campaign trail right near the top of the list.”