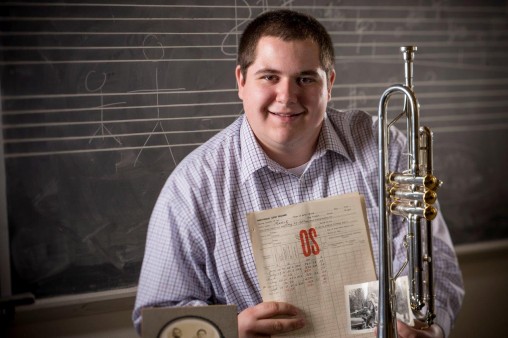 Passion for playing lures music education major Alex Ryan from the family farm to Wright State. (Photos by Will Jones)

Farming is in his blood, but music is in his soul.

Freshman Wright State University music education major Alex Ryan spent much of his boyhood on a 50-acre farm near the Clark County village of Clifton, where he raised livestock to show during 4-H competitions at the county fair. All signs pointed to a career in agriculture.

But Ryan’s grandmother would take her young grandson to the Clifton Opera House every Saturday. And that’s when his love affair with music began.

“I thought it was the greatest thing in the world hearing jazz music,” he said. “I was the youngest one there by far.”

Ryan would go on to join the Springfield Children’s Chorus. He later took up the trumpet and began taking lessons at Wright State when he was a freshman in high school.

“When I was 8 years old first starting in 4-H, I was out there morning and night bottle-feeding my dairy calf and also feeding hogs and lambs,” he said.

There were also great memories of picking apples and making cider. There was the occasional misstep — like the time 9-year-old Alex shaved his dairy calf for the fair when his parents were away.

“It was botched,” he said. “Short hair here and long hair there. It was a mess.”

But Ryan is grateful for his down-on-the-farm experience. And even though he lives in a house near the family farm, he still spends nearly every day at the farm helping his younger brother and sister feed and walk their 4-H animals.

Ryan also works at Young’s Jersey Dairy, helping with the animals and driving tractors for hayrides and the corn maze. And he was recently hired as public relations coordinator for the Clark County Fair. 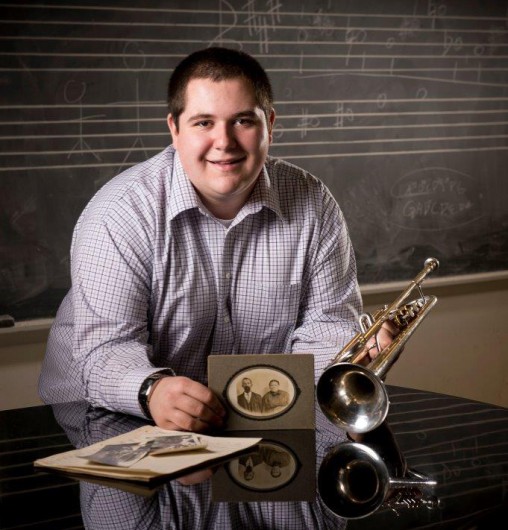 After college, Alex Ryan wants to teach music and aspires to be an orchestra conductor.

A typical day for Ryan involves practicing his trumpet at Wright State before classes begin at 8 a.m. After classes end at 3 p.m., he practices some more and then returns home to do homework and chores. Then he goes to the family farm for an hour or two in the evening.

Ryan spent spring break touring Italy with the Wright State University Collegiate Chorale and was able to sing during Mass at St. Peter’s Basilica in Rome, an adventure he called “breathtaking.”

“The experiences I’m getting here at Wright State are just as good, if not better, than if I were going to Julliard or Northwestern because the faculty here are some of the best,” he said. “They are all inspirational.”

Ryan enjoys all kinds of music, from classical to rock ’n’ roll to country.

“I appreciate it all, and I find beauty in all of it,” he said

After college, Ryan wants to teach music and aspires to be an orchestra conductor.

“Why not go to work every day loving what you do?” he said.