“This is phenomenal. This is surreal. It’s still not sinking in,” Wik said after winning the competition. “I never thought something like this would happen. … This is a dream come true.” 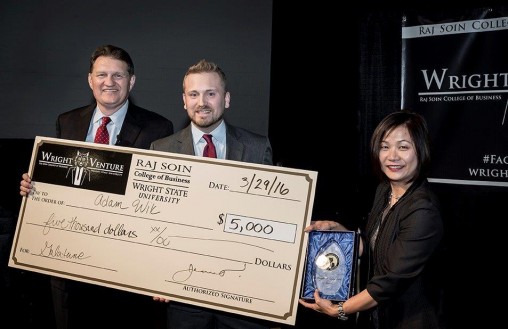 Wik, who has a bachelor’s degree in marketing from Wright State and is working on his M.B.A., actually created the card game when he was 10 years old. He was urged by family and friends to take it to the market.

“Thankfully, with my education at Wright State University, it lets you take that big leap from childhood dream to something you can actually execute in the market,” he said.

The Raj Soin College of Business created Wright Venture with the partnership of James Family Entrepreneurship program and the Wright State University Foundation.

During the competition, Wik pitched his business concept to a panel of five judges — wolves — who wanted to know if he was also targeting women as customers, how he expected to become profitable so quickly, and suggested that he sink as much money as possible into marketing.

The Galatune game involves two to five players who each control a champion warrior. They fight each other at the same time and get points by defeating their opponents.

“You have everyone reacting and moving in real time. It’s more like an actual war where you have to predict and understand your opponents better,” Wik said. “I’ve been playing games all of my life, and I haven’t seen anything quite like this. It breaks a lot of conventions of the gaming industry in new and exciting ways.”

Wik said he will use the loan money to wrap up production and artwork so the game can hit the market in time for the holiday season. Galatune will also be featured at the GloryCon convention held at the Wright State Student Union on April 23.

The other two finalists in Wright Venture were Just Modern Tees, a team seeking financial support to produce T-shirts with graphics that highlight urban Midwest themes, and Shady Lake Visionaries, a video production business that focuses on the outdoors.