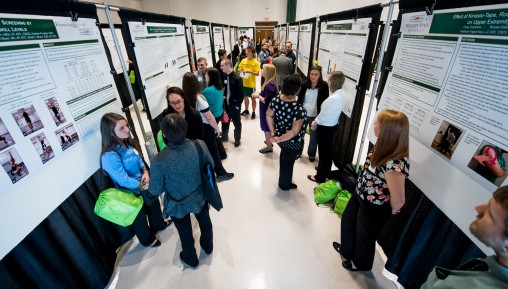 The annual Celebration of Research, Scholarship and Creative Activities served as a university-wide showcase of research projects by undergraduate and graduate students. (Photos by Erin Pence)

Student research projects on cancer, surgery, concussions, infant mortality and even the English Peasants’ Revolt of 1381 were among those highlighted at Wright State University’s 2016 Celebration of Research, Scholarship and Creative Activities.

More than 170 students, faculty, staff and industry representatives attended the April 15 event, which featured 75 poster booths and 35 oral presentations, in the Student Union.

Michael Bridges, president of Peerless Technologies Corp. and chair of the Wright State University Board of Trustees, told the student researchers it will not be long before they are making significant contributions to manufacturing, automotive, pharmaceutical, national security and other industries.

“It starts with the work that you do today,” said Bridges.

The annual event, in its seventh year, serves as a university-wide showcase of research projects by undergraduate and graduate students. Peerless Technologies is the presenting sponsor and has been for many years.

Undergraduate researchers who discussed their projects during the plenary session included Benjamin Boyd, a mechanical engineering major who studied the mechanics of fluid inside a working Tesla turbine; Kaydee Davidson, a supply chain management major who analyzed country of origin procedure at Crown Equipment; and Muhammed Saleh Hamdan, a biomedical engineering major who investigated the aftereffects of resonance for use in laparoscopic surgery.

“In my opinion, research is an obligation to society — not only to increase the amount of knowledge that we have, but also to enhance the quality of life,” said Hamdan.

Other researchers included Amanda Jones, a nursing major who examined the effects of sending health-advice text messages to mothers at risk of having their newborns die; Joseph Panfile, a history major who studied how communities used legal identities during the Peasant’s Revolt of 1381; Melissa Ward, a biological sciences major who analyzed a protein linked to leukemia and pancreatic cancer; and Sarah Stauffer, an athletic training major who studied the reliability of concussion vital signs under varying conditions.

“I got involved in research as soon as I decided I wanted to be a medical professional,” said Stauffer. “It’s our responsibility to know why we are doing what we are doing with our patients to have the evidence backing our medical decisions.” 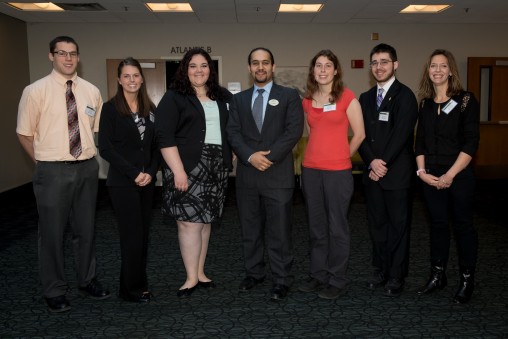 Celebration of Research, Scholarship and Creative Activities featured presentations by Wright State students on their research.

Jason Deibel, director of undergraduate research and experiential learning in the College of Science and Mathematics, said the event is a way to honor the success of the students and give those who are presenting their research for the first time a supportive environment.

“One of the things that gets forgotten is the ability to communicate your results,” he said. “This is the start of it.”

“You identify in the field that you work with because you are actually doing the work,” he said.

Deibel said the event also enables industry representatives to interact with the students and find out about their research.

“They want to know what’s in the pipeline,” he said.

Among industry representatives attending the event and serving a panelist was Juan E. Catano-Montoya, a senior research engineer at the Sidney, Ohio-based Emerson Climate Technologies.

“We’re interested in seeing the research projects at Wright State,” said Catano-Montora, adding that it could result in collaboration with the university and possibly jobs for students down the road.