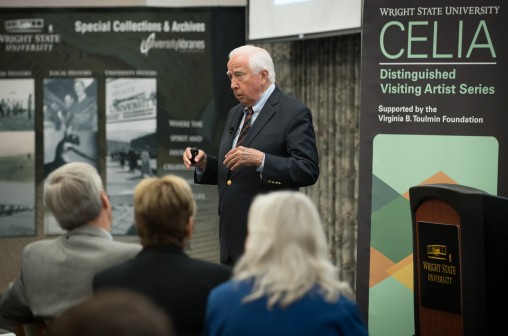 In nearly five years of research for his bestselling book “The Wright Brothers,” David McCullough came to know the brothers Wilbur and Orville Wright more closely than he knew his closest friends.

In a distinguished career of writing historical narratives such as “Truman,” “John Adams” — both of which earned him the Pulitzer Prize for biography — and, last year, “The Wright Brothers,” McCullough was able to play peeping tom on some of the great figures of history, he told a master class at Wright State University on April 19 in the Student Union’s Endeavour Room.

“The letters the Wright brothers wrote in private correspondence, within the family almost entirely, number over a thousand in the Library of Congress. And none of them — none of the four, the father (Bishop Milton Wright), the sister Katharine and the two brothers — were capable of writing a short letter or a boring one. They were absolutely superbly written. We can go into their lives in a way that we can’t normally,” McCullough told the class.

McCullough, born and raised in Pittsburgh and now living in Boston, returned to Wright State this week as actor-filmmaker Tom Hanks was visiting the campus to dedicated the Tom Hanks Center for Motion Pictures and take part in a fundraising gala for Rise. Shine. the Campaign for Wright State University. McCullough and Hanks visited other sites related to the Wright family during their visits to Dayton. 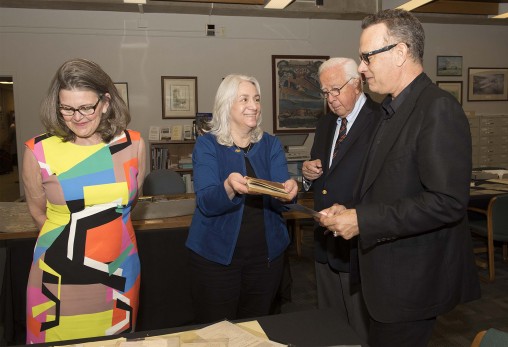 During their visit to campus, Hanks and McCullough toured the archives and examined rare Wright artifacts that are part of the university’s “Wright Brothers Collection,” one of the most complete collections of Wright material in the world. The collection includes the Wrights’ own technical and personal library, family papers and other documents detailing the lives and work of Wilbur and Orville Wright and the Wright family.

The Wright family home at 7 Hawthorn Street in what is now the Wright-Dunbar neighborhood was small and simple, but it had a library stocked with the classics of literature, philosophy and science. Their father emphasized the importance of English and writing, McCullough said.

“And so when one reads the letters that they wrote, which they wrote in great quantity, you’re struck right away not only by how correct the English is grammatically, but how effectively they wrote and the breadth and variety of their vocabulary,” McCullough said. “We think with words. And if our vocabularies are declining, which they are, that’s not a healthy sign. So I hope one can take an example of the Wright brothers, if you’re embarking on an education, as we are all our lives, or should be, to read. And to read the works of literature that have survived the test of time. And to read with the sense of finding fulfillment in what we read.”

The Wright family letters are important in helping us know Wilbur and Orville not only for what they did, but who they were, McCullough said. And understanding how individuals change history requires understanding how they live, he said.

“I think the Wright brothers are a lesson in history if ever there was,” McCullough said — not just in their invention of the airplane, “but how they went about their pursuit of purpose and dedication they brought to their work, and the fact that they did not let failure defeat them. They could get knocked down, and they did in many ways, but they always got back up again and they always learned from their mistakes or their failures.”