Acclaimed actor, producer and director Tom Hanks paid a visit to Wright State University to dedicate the Tom Hanks Center for Motion Pictures, saying he hopes the center inspires students to do the hard work necessary to launch film careers.

Nearly 2,000 students, faculty, staff and others turned out April 19 to see Hanks and witness the ribbon-cutting for the newly renovated center.

“I hope that this building spurs the students that come here — the freshmen that are here now and the freshmen that will be here in the next 20 years — I hope that it spurs them to working harder than they ever have in their lives,” said Hanks. “Because if you work the hardest you ever will in your life at the beginning of your career, the rest takes care of itself.” 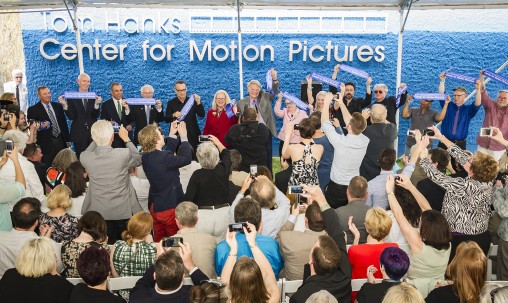 Earlier in the day, Hanks had taken questions from about 300 Wright State performing arts students, sharing highlights from his movie career and discussing what it takes to succeed in the business.

Then before touring the new center, Hanks inspected Wright brothers photos and documents in the Wright State Special Collections and Archives.

Hanks made his entrance at the dedication to a chorus of trumpet-playing students and the roar of the crowd, which had swelled steadily in expectation of seeing the Hollywood icon.

“Is this an incredible day in the history of our university or not?” said President David R. Hopkins. “We get to be the first and the only university to name a building housing a world-class program after Tom Hanks. That’s pretty special.” 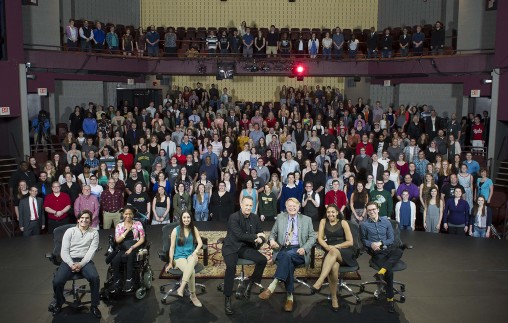 Tom Hanks, center, and Wright State Theatre, Dance, and Motion Pictures department chair and friend W. Stuart McDowell pose for a picture with performing arts students after a “Talk Back” event with Hanks in the Festival Playhouse. (Photo by Will Jones)

The Motion Pictures program is now entering its fifth decade and features nationally recognized faculty and alumni who have won Emmys and other high honors. Faculty have produced internationally acclaimed documentaries such as “The Last Truck: The Closing of a GM Plant,” nominated for an Academy Award in 2010, and the Emmy Award-winning “Lion in the House,” about young cancer patients and their families.

“The Tom Hanks Center for Motion Pictures will become a new landmark on the Wright State University campus and symbolize our ongoing commitment to producing the filmmakers of tomorrow,” said Kristin Sobolik, dean of the College of Liberal Arts. “Our students and alumni will carry on Tom’s legacy of making movies that matter.”

In addition to getting hands-on experience in all aspects of filmmaking, students complete a curriculum that is deeply embedded in the liberal arts and strongly rooted in motion pictures history, theory and criticism. The program also stresses the humanist values of movies — the potential for movies to make the world a better place by sharing the human experience, illustrating courage and showing what people have overcome.

Film student Michaela Scholl thanked Hanks for allowing Wright State to name the center after him.

“We can now say we studied every day at the Tom Hanks Center for Motion Pictures,” said Scholl. “That’s a bragging right that only a Wright State student can claim.” 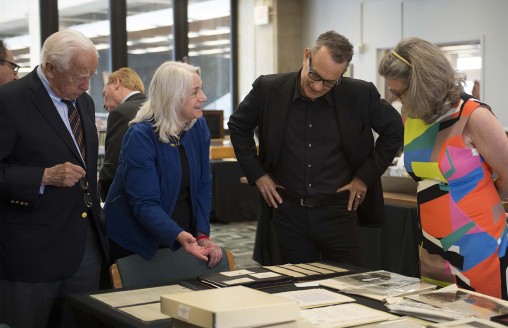 Previously, program offices and classrooms were in the basement of the nearby Creative Arts Center. And there was no production studio, forcing film students to do much of their work in the field.

At 14,500 square feet, the new center is nearly triple the size of the previous space. In addition to a production studio, there are editing suites, a multipurpose classroom, a digital animation lab and even a “green room” that will serve as a lounge as well as a think-tank for students to develop future film projects. The center’s front entrance features the “eyelash,” a sculpture of cylinders that stair-step toward the sky.

Although Hanks is not a graduate of Wright State, he performed in a Shakespeare production at Wright State in 1978 and has a long-running love affair with the university.

Hanks has started a scholarship fund at Wright State, produced videos in support of the school and given countless hours to help the school raise money for its performing arts program.

Hanks is the national co-chair of Rise. Shine., a fundraising campaign that promises to further elevate the school’s prominence by expanding scholarships, attracting more top-flight faculty and supporting construction of state-of-the-art facilities. 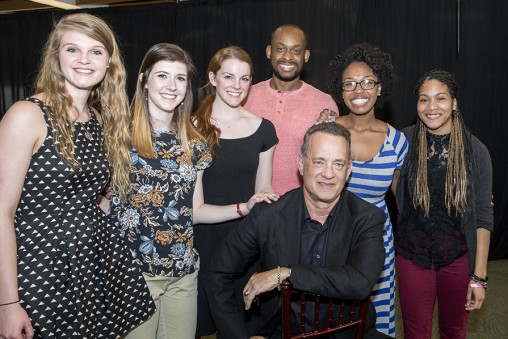 At the dedication ceremony, Hanks jokingly warned students against defacing the building, whose striking blue color sets it apart from other campus structures.

Hanks said he hopes students have three key experiences in their film projects — failure of one they think is genius, one that is mediocre and one that is truly brilliant. He said all of those experiences require the same amount of perspiration and give the same lesson.

“There is no guarantee, other than your ability and faith in yourself and your willingness to follow your own instincts and do the work yourself,” he said.