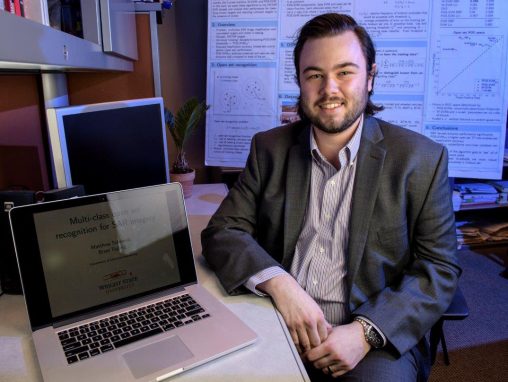 Matthew Scherreik, who is pursuing a Ph.D. in electrical engineering, won the Lockheed Martin Best Student Paper award for the third year in a row. (Photo by Erin Pence)

His target-recognition paper clearly hit the target. In fact, it was a bulls-eye.

Automatic target recognition uses data collected by sensors and algorithms designed by researchers to determine the types of objects of interest to warfighters.

“They might want to know if it’s a tank, a Humvee or a school bus,” said Scherreik. “Sometimes these signatures can be really hard for humans to interpret. So we use algorithms to identify what kind of target you are looking at.”

Bethesda, Maryland-based Lockheed Martin is one of the largest companies in the aerospace, defense, security and technologies industries. The company has received the coveted Collier Trophy six times, including for leading the team that developed the F-22 Raptor fighter jet.

The company announces the awards for best papers during an annual conference hosted by SPIE, the international society for optics and photonics. This year the conference was held in Baltimore, where Scherreik presented his paper on automatic target recognition.

All of Scherreik’s research has been funded by the Center for Surveillance Research, a collaborative effort by academia, government and industry to conduct research and student training for the next generation of technology leaders. The center’s two university sites are at Wright State and The Ohio State University.

Scherreik developed a penchant for math and science when he was growing up in Bowling Green, Ohio.

“Since early middle school and junior high, I was doing the science fairs,” he said. “For awhile, I was taking things apart and putting them back together — kind of the classic engineer story.

But Scherreik spent a lot more time building things than taking them apart.

“I especially enjoyed building robots and vehicles out of Legos,” he said. “I would often build things according to the instructions first and then modify the designs to fit what I had in mind.”

After graduating in 2009 from Toledo Christian High School, where he played on the varsity golf team, Scherreik won a full academic scholarship to Wright State.

Scherreik is also a research engineer at the Wright State Research Institute, where he works on target recognition algorithms and radar signal processing. He says his whole Wright State experience has given him a great sense of accomplishment.

After graduation, Scherreik may go into academia.