It was a class project using 3-D printers to make artificial hands for children in need. But it was even more than that. The students were also learning how to gather information and then marry words, images and sounds to communicate it.

The special topic Digital Rhetoric class was taught by assistant professor Ashley Hall, who has been teaching writing for a number of years. She said her students became deeply and emotionally invested in the project.

“The level of engagement that I saw — the level of motivation and learning that was happening — was the highest I have seen so far,” Hall said.

An assistant professor of English and communication, Hall studied at the University of North Carolina. She joined the faculty at Wright State last fall.

She likes to push the boundaries with her students and make them think about writing in different ways.

“What I’m trained to do is be comfortable in the uncomfortable spaces of new media,” Hall said.

“I feel it is important to both theorize digital media but also work with and produce digital media,” she said. “And I wanted to challenge myself to do something new.” 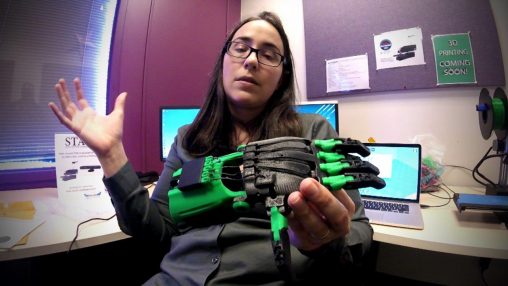 So Hall and her 18 students partnered with “Enabling the Future,” a global network of teachers, doctors, engineers, scientists and other volunteers who use 3-D printers to create free printed hands and arms for those in need of assistive devices for their upper limbs.

The plastic, artificial hands are mechanical digits that curl on hinges and pins, bringing to mind the cyborg hands in the “Terminator” movies. Slipping the wrist through the elastic brace of the artificial hand and clenching make the plastic fingers grip.

On the first day of class, Hall brought in pieces of an artificial hand and let the students take them apart to understand how the hands worked.

As part of a lesson on file sharing, the students went online and downloaded files that included instructions and software for making the hands.

She said the students had to learn how to navigate the ecology of online resources in order to make the hands.

“This required them to live in an uncertain space and to be introduced to being uncomfortable,” she said.

The hands were produced by a 3-D printer in the Dunbar Library from spools of green, black and glow-in-the-dark blue plastic filaments that melt best at specific temperatures.

The students worked in teams, tackling different tasks. Two teams built the hands, another documented the process with a video, and a third served as a liaison with a community partner, the Helping Hands Foundation, which aids children with upper limb anomalies.

“Even though we did have these teams, there was also quite a bit of crossover,” Hall said.

Scott Hannah, a junior mass communication major, helped build the hands, printing off different parts and then assembling the pieces with printed pins or screws.

“It was definitely a process, and it did take time,” said Hannah. “But it was also really exciting because we did this all for an amazing cause.”

Hannah said it was great to see the finished product and how the hand worked.

“I’m glad I took this class because I definitely learned a lot about 3-D printing, and I learned a lot about putting passion behind a project,” he said. “This project definitely helps Wright State’s credibility in being such a disability-friendly school because this project is all about giving back to the community, helping good causes and organizations doing good in this world.”

The student teams used the “Agile” philosophy, which has been widely employed in computer development, coding and engineering. It values individuals and interactions over processes and tools, customer collaboration over negotiation and responding to change over following a plan.

In documenting and filming the project, the students were given a plausible audience to imagine and then taught to communicate with words, visuals and sound that complemented each other.

Carol Loranger, faculty president and chair of the Department of English Language and Literatures in the College of Liberal Arts, said Hall has a genuine love for integrating new technologies into the study of writing, rhetoric and communication.

“The energy and enthusiasm she brings to her teaching are infectious,” Loranger said.