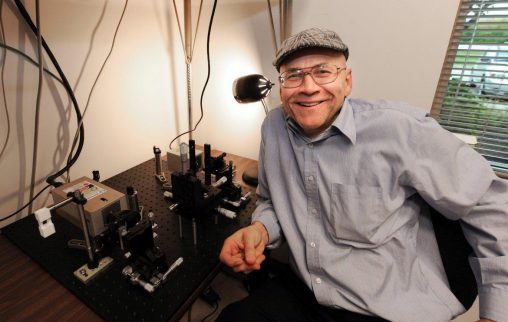 Elliott Brown, the Ohio Research Scholars Endowed Chair in Sensors Physics, co-wrote a paper that was honored by the Institute of Electrical and Electronics Engineers Microwave Theory and Techniques Society.

The demonstration of technology developed by a Wright State research team to better diagnose and treat eye disease and improve the success of eye surgeries won a Best Paper Award from an international organization of engineering professionals.

The award was presented at the IEEE International Microwave Symposium in San Francisco on May 25.

The paper was co-authored by Wright State’s Elliott Brown, the Ohio Research Scholars Endowed Chair in Sensors Physics, and led by a team of researchers from UCLA.

It won the 2016 THz Science and Tech. Best Paper Award from the IEEE (Institute of Electrical and Electronics Engineers) Microwave Theory and Techniques Society. The society, which has more than 10,500 members, promotes the advancement of microwave-to-THz technology and its applications.

“The paper is about sensing the hydration level of the human cornea with unprecedented accuracy,” said Brown. “There has been a longstanding need in the field of opthalmology and optometry to do it better. Several diseases of the eye correlate to corneal hydration level, and corrective surgeries (e.g., LASIK) require a precise knowledge of that hydration level. This is a big deal in opthalmology.”

The technology uses terahertz pulses to determine the hydration through measurements of the reflectance. The award was for demonstrating a novel terahertz imaging system on an application clearly of importance to human medicine.

The system was demonstrated in pre-clinical tests at the UCLA Medical School on the eyes of New Zealand male rabbits, eyes that closely mimic those of humans.

Brown is an expert in terahertz radiation, which consists of the invisible electromagnetic waves in the spectrum higher in frequency than microwaves and lower than infrared light.

Terahertz imaging has been used for such things as inspecting foam insulation on the space shuttle’s external tank, looking for cracks and bubbles. And it is used to test semiconductor chips, such as microprocessors, for circuit defects on the 10-micron scale.
Brown said the paper was published in 2015 after the researchers had their first major success the prior year. 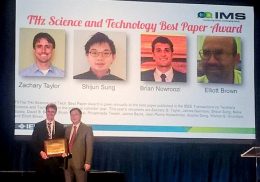 A team from UCLA led the research into the award-winning paper. Dr. Zachary Taylor accepts the award.

Critical components of the system such as the THz pulse generator are being fabricated and tested in Wright State’s new Neuroscience Engineering Collaboration Building.

“Some of these components not only improve system performance, but they also support new architectures that enable new system capabilities,” said Brown. “We’re providing some of the world’s best THz components. That part I’m very proud of.”

The next step is to grow existing National Institutes of Health funding to accelerate and expand the program.

“It could change the landscape of opthalmology,” said Brown. “If affordable enough, such a THz system could even put sensors in optometry offices.”