The debate is scheduled for Sept. 26 and was to be held at the Wright State Nutter Center. It will now instead be held at Hofstra University in New York, which is the alternate site.

“This is a very difficult decision,” Wright State President David R. Hopkins said July 19. “But there has been a growing crescendo of concern about what it would take to guarantee the safety and security of the campus and the community. The expense would be daunting.”

Unlike private universities that have hosted debates in the past, Wright State cannot restrict public access to its campus, which adds to security challenges.

“We were fully aware of the challenges and were prepared to meet them when we decided to host the debate, but things have changed,” said Hopkins. “The current national environment has made security even more critical.” 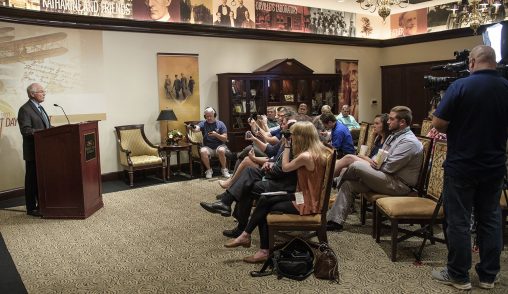 Wright State President David R. Hopkins discussed his decision not to host the presidential debate with the media July 19. (Photo by Will Jones)

“It’s the responsible thing to do,” said Bridges. “While the community has been overwhelmingly supportive of Wright State hosting the debate, the safety and security of the campus and community is of paramount importance.”

Hosting the debate was expected to cost Wright State between $3 million and $5 million and as much as $8 million. Hopkins said the costs of additional necessary security would add to the financial burden on the university.

“This decision has weighed heavily on my heart. I really wanted this experience for our students,” Hopkins said. “But the safety and the financial health of our university must take precedence.”

Hopkins expects many debate-related activities at Wright State to go on as planned, possibly including a debate festival, an issues forum and debate watch parties.

Hopkins thanked students, faculty, staff, alumni, and members of the community, especially the host committee, who have been preparing to host the debate.

“They have worked tirelessly,” said Hopkins. “I can’t thank them enough for their efforts.”