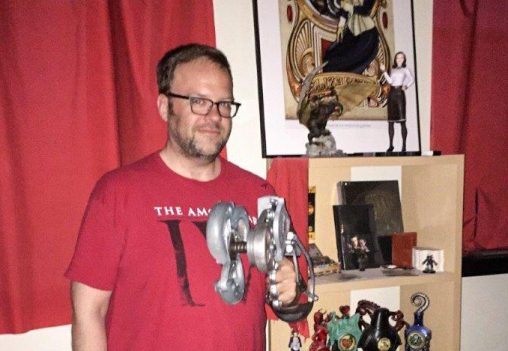 Michael Kraack, who graduated in 1999 from Wright State with a computer science degree, makes his mark in the video game industry. (Contributed photo)

When it comes to his job, Michael Kraack doesn’t play games. He makes them better.

The Wright State University alumnus has turned a computer science degree and love for video games into a software engineering career that has enabled him to work on games played by millions of people.

Kraack is a senior software engineer at Disbelief, a Cambridge, Massachusetts, company that offers feature development, optimization, troubleshooting and other technical engineering support for the video game industry.

“I basically grew up playing video games, but I actually never considered it as a career,” he said. “It never even occurred to me that it could be a career.”

Kraack grew up in Piqua. His father was in the Air Force and Navy and then worked at Heapy Engineering, a Dayton-based engineering design and energy consulting company. His mother worked for the Social Security Administration.

Kraack took an early interest in computer games. His first computer was a Commodore 64, which was a big deal at the time. He was also into “Dungeons & Dragons,” a fantasy tabletop role-playing game in which each player plays a specific character.

Kraack graduated from Piqua High School in 1992 and enrolled at Wright State because of its strong academics and proximity to his home. He decided to major in business.

But then his older brother graduated from Wright State with a degree in computer science and landed a job with Pyrotechnix, a video game developer in Cincinnati.

“I was a business major at the time because I couldn’t think of what else I’d want to do,” Kraack recalled. “I started the process of switching majors pretty much the day after my brother told me he got a job making games. I couldn’t dream of doing anything else.”

After working his way through college, Kraack graduated in 1999 with a bachelor’s degree in computer science.

He got a job at Sunstorm Interactive in Indianapolis, where he worked on a number of small budget games. He later worked at Midway Games in Chicago, on “John Woo presents Stranglehold,” and Irrational Games before coming to Disbelief.

“Largely my role is to implement desired game engine features, fix bugs, optimize code and performance,” he said. “On a typical day I’m either debugging and fixing crashes and other bugs, implementing a new system or merging new middleware or engine upgrades to whatever codebase I’m working in.”

Kraack says that what makes his job so special is simply that it is a job making video games.

“I could work in any number of fields with my degree, but I’d much rather make games than make accounting software or something equally mundane,” he said. “I’ve worked on huge games that have been played by millions of people, and that’s a pretty awesome thing. Also, the people I’ve worked with in my career are among the smartest and most creative people I’ve ever met.”

Kraack has worked on popular games such as “BioShock Infinite” and “Borderlands: The Handsome Collection.”

He says Wright State helped him develop a wide range of computer programming skills, which helps him in his current job since he might work in graphics one week, networking the next and audio the next.

“I also learned critical thinking at Wright State, which is probably the single most important skill I have,” he said. “Programming — particularly fixing bugs — is often detective work, and without that skill I couldn’t be nearly as effective.”

Kraack is also an ace karaoke singer who made his karaoke debut at Wright State.

“I had a class where I had to speak in front of the class — something that terrified me at the time,” he said. “I went to the Rathskeller for karaoke figuring if I could get up and sing in front of a bunch of people I could surely talk in front of them. It worked.”