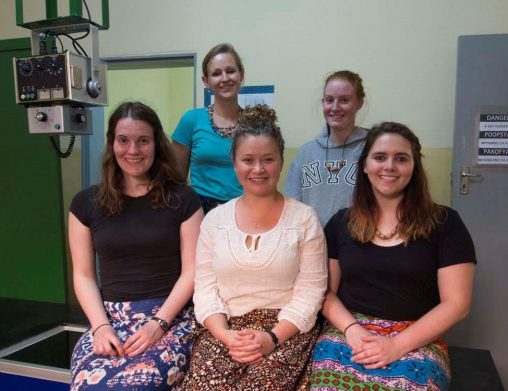 A team of Wright State University engineering students installed an X-ray room at a hospital in Malawi as part of a series of efforts to help improve health care in the tiny African nation.

The effort was overseen by Thomas Hangartner, professor emeritus of biomedical engineering, medicine and physics.

“This community was extraordinarily welcoming and appreciated the help we were able to provide them,” said Hangartner.

The five Wright State students arrived in Malawi on May 7 and installed the X‐ray room at Nkhamenya Hospital, about two hours north of the Malawian capital of Lilongwe.

The students split into two teams. One supervised the construction of the X‐ray room and the other instructed selected hospital staff in the safe use of X‐ray equipment.

In 2014, four Wright State students along with Hangartner delivered and installed an X-ray system in a clinic at St. Ann’s Hospital in Chilumba. The X-ray imager was designed by Wright State biomedical engineering students.

The imager does not require the supplies of conventional X-ray systems, which means there is no need for films and developing chemicals, so the project is in itself self-sustainable. At the clinic, it is used primarily to identify bone fractures and tuberculosis.

Last year, Wright State students installed an X-ray room at the Karonga District Hospital. Over the past year, the hospital has taken more than 5,000 radiographs, offering medical benefits and saving the patients and their guardians an estimated $35,000 in travel expenses.

After completion of this year’s project, the students participated in a daylong “handover” ceremony at Nkhamenya Hospital that included a public tour of the X‐ray room, an explanation of the benefits of the project and speeches from hospital officials and community leaders as well as traditional dances, songs and sketches.

“It was very clear that the hospital as well as the neighboring secondary girls school were very well managed,” said Hangartner.

The Nkhamenya Secondary Girls School allowed the Wright State students to serve as teaching assistants in a computer class and to closely interact and become friends with the local girls.

“Our team of female engineers was certainly an inspiration of what girls can achieve, and tears flowed when the time came to depart,” Hangartner said.