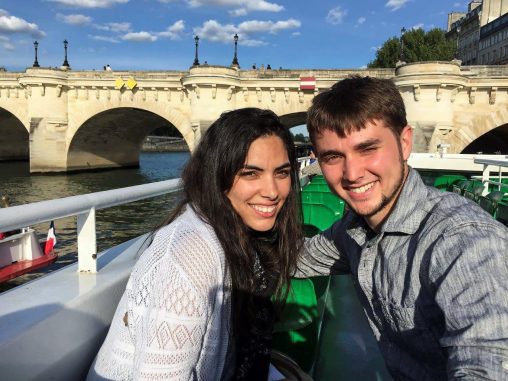 Sarah Koraym with her husband on a Seine boat tour in Paris. Koraym studied French at Wright State and will begin medical school in London this fall. (Contributed photo)

Having open-heart surgery can be stressful. Having it in a country where you don’t speak the language can be terrifying.

So when a French-speaking man from Rwanda was preparing for open-heart surgery at Grandview Hospital in Dayton, Wright State University student Sarah Koraym appeared like an angel.

Koraym, a French major and future medical student, just happened to be volunteering in the office of a cardiologist at the hospital and was able to translate for the Rwandan man.

“It was so simple but so important,” she recalled.

Koraym graduated from Wright State in April with a bachelor’s degree in French and is headed to Saint George’s University of London this fall to pursue her medical degree. She says majoring in a liberal arts program instead of a science seems to have paid off in her quest for a career in medicine.

“My French studies were attractive to potential med schools because I had done something different, so I stood out as a candidate,” she said. “Everyone in med school has a science background, but not everyone has a liberal arts perspective or a foreign language. Also, the French classes gave me great communication skills and helped me earn an excellent score on the reading section of the MCAT, which really boosted my overall scores.”

Koraym had been majoring in computer science when she decided to take a French course just for fun.

“I fell in love with the language and wanted to do more than just dabble in it,” she said.

The clincher came when she learned that her French instructor’s mother had worked as a physician in a French-speaking country in Africa and had made a huge difference in underserved communities there.

Koraym said her adviser worked out every detail of her French major for her and she added all the pre-med classes based on rigorous pre-med requirements.

“It was the perfect major because I had interactive classes and extracurricular opportunities to complement the lecture hall classes,” she said. “The French classes were a break for me and allowed me to travel, meet new people and learn about film, art, culture, music and literature.”

Koraym was vice president of the French Club, a French tutor and a supplemental instruction leader. She also took part in the France Ambassador Program to Paris and Bordeaux. She stayed with a family in Bordeaux and then learned to navigate around Paris.

“My absolute favorite moment was going to the Sainte Chapelle on a sunny day with all the light streaming through those amazingly intricate stained glass windows,” she said. “I remember thinking, ‘This is it! I’m here. I’ve studied this place, I know facts about it, but here I am in a gorgeous chapel that has seen centuries of history.’ I felt so privileged to be there.”

Koraym advises students who want careers in medicine, law or business to take any language, add the prerequisites they need for their field and work with their advisers to map out their journey.

“The doors will open because you will have a skill that others will not have,” she said. “…I would just say go for it. The French major is enjoyable, and you’d always wonder what it would have been like to speak fluent French. Seize the moment. You might learn a lot about yourself in the process.”

Koraym is excited at the prospect of practicing medicine around the globe.

“I really want to make a difference in the world by serving those who have limited access to medicine,” she said.