Reaching for the moon 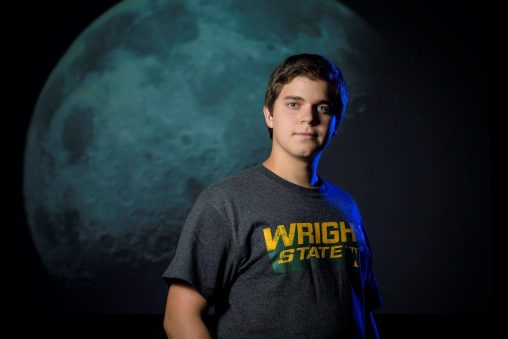 Eric Harris, a freshman electrical engineering major at Wright State, photographs the moon almost every night and plans to capture images of every full moon for the next 16 years. (Photo by Erin Pence)

For a 9-year-old boy, it was a night to remember.

Sick with worry about his 11-year-old sister, who was seriously ill and being treated in the intensive care unit of a local hospital, Eric Harris happened to glance up at the night sky in his Milford, Ohio, neighborhood and saw something that would change his life.

The moon in reddish hues was rising and beginning to go into what would become a total lunar eclipse. For the next three hours, Harris was mesmerized.

That night of Feb. 20, 2008, ignited Harris’ passion for lunar photography. And today, the freshman electrical engineering student follows that passion at Wright State University and is working to start a college astronomy club.

Harris began taking photos of the moon in 2010, using a point-and-shoot camera he placed in the eyepiece of his telescope. But the quality wasn’t very good. So he later invested in a better telescope, a Bushnell optics scope that made his photographs much sharper.

“I took some of the greatest pictures I’ve ever taken two years after I took my first picture,” he said.

But his best series of photos were of the so-called “Blood Moon” — the total lunar eclipse of October 2014.

“I got to shoot a picture as the moon set behind the trees in full color,” he said. “And I got to take enough pictures so you could watch it go down as the terrain lit up.”

The photos currently hang in frames at the Harris family home in Milford, just east of Cincinnati.

Harris was attracted to Wright State because of its size. He felt it was a school where he would be noticed and not just be a number.

“And I came to Wright State looking for people who would be interested in what I do as a person,” he said.

Harris chose to major in electrical engineering because it will put him on a path to an aerospace career but also give him other options.

“In such a school as Wright State — we’re right next to an Air Force base — I think the best choice for me is an engineering major that can get me toward aerospace and get me toward space exploration,” he said.

Harris takes photos of the moon nearly every night just outside his Honors dorm. One of his goals is to “animate” the universe, revealing it in ways that can’t be perceived by the human eye.

“The cycle of phases of the moon is not something people see on a minute-to-minute basis. They see it on a day-to-day basis,” he said. “So what can I do to make this more visible to people? I take a picture every night that I can, string them together, and what you get is the moon waxing and waning in a beautiful cycle that repeats every single month.”

The photos of the moon on Harris’ laptop pulse in a hypnotic dance as he mouse clicks through its phases. He hopes to photograph the moon through its entire draconic cycle, which takes more than 18 years. So far, he has photographed the moon for 22 consecutive months.

“The moon is a spherical object, and it doesn’t quite always point the same part of itself towards Earth; it wobbles just a bit,” Harris said. “The cycle for the moon to go back the same way it was going before — or for two full moons to be the exact same — takes 18.6 years. So if I document every full moon for 18.6 years, I would have cataloged that. No person has ever taken a picture of the full moon every single time for 18 years.”

“The most challenging thing I can think of is to try to shoot a picture of the moon when they tell you there’s just going to be a small chance that clouds will clear out for an instant,” he said. “I’ll stay up for hours.”

Harris has studied astronomy atlases and follows social media groups and bloggers from around the world who produce images of the moon. His dream job following graduation would be with NASA’s high-flying observatory, which has an infrared telescope that enables astronomers to peer deep into the heart of the universe.

“I want to do something that puts a telescope high enough to be able to see many more things than we could on the ground, but still good enough for the average person to be able to see,” Harris said.