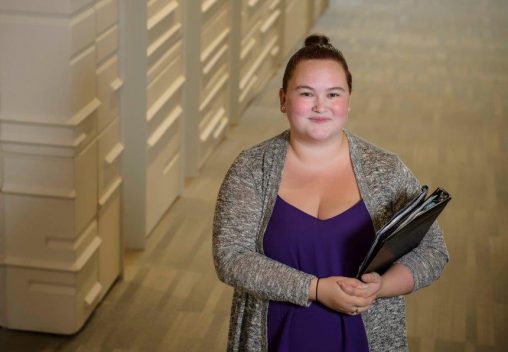 Music education major Katie Schmidt shared her skills with Jamaican schoolchildren during a study abroad and service-learning trip. (Photo by Will Jones)

Music is serious business in Jamaica. Wright State University music education major Katie Schmidt found that out when she spent 10 days teaching music at an elementary school in the Caribbean island nation.

The students at Boston Bay Elementary School seemed to be more earnest about music than their American counterparts, she said.

“They almost have more of a respect for it,” said Schmidt. “Music is very different in their culture. They don’t learn it in school. It’s all from their families and from the streets.”

Schmidt grew up in Columbus, Ohio, and became involved in band in the sixth grade, playing the trombone. After graduating from Franklin Heights High School in 2013, she was drawn to Wright State because her grandfather — who also played the trombone — had attended.

“I felt the most at home here,” said Schmidt, who also works in the university’s Office of Disability Services. “I started out as a voice major and then found my place in the instrumental world. There is definitely a lot going on and a lot of really talented professors and students.”

Earlier this year, Schmidt decided she wanted to accompany a friend of hers who was going to Jamaica. So she applied to and was accepted by the Jamaica Field Service Project, a study abroad and service-learning program for college students accredited by the State University of New York.

The project brings school supplies, tutors, musical instruments and instruction to the schools of Jamaica five times yearly. Trips include music therapy and community health students who do volunteer work. 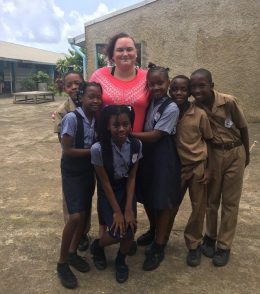 During a study abroad and service-learning trip to Jamaica, Katie Schmidt taught students singing and how to play the recorder.

Schmidt knew very little about Jamaica at the time, so she researched the country and its culture before the June 9 to 19 trip.

The island nation, which lies in the Caribbean about 90 miles south of Cuba, is home to 2.8 million people. Music plays an important part in the culture and lives of residents and includes reggae, dancehall and ragga. Internationally known reggae musician Bob Marley was Jamaican.

Reggae music can be heard blaring from homes in Jamaican cities and villages. Merchants who sell jerk chicken and other Jamaican cuisine on the streets often play reggae through homemade sound systems they have rigged up.

Schmidt was part of a group of students who were music education and music therapy majors. She was assigned to the Boston Bay school, a three-hour drive from the Jamaican capital of Kingston.

The school was largely an open-air facility, with classes taught outside. The students all wore uniforms.

Schmidt taught the students singing and how to play the recorder, a flute-like woodwind musical instrument.

“They had never had experience with recorders before,” she said.

“I want to go see the rest of the world,” she said.

For now, she is focusing on graduating in the spring. Her career goal is to teach music and beginning band in elementary and middle school.