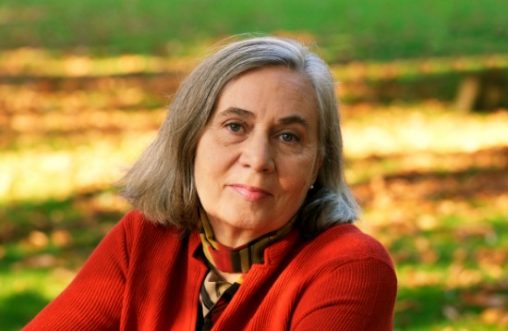 “Literature, Religion, Peace: A Conversation with Marilynne Robinson” will be held at 11:15 a.m. on Nov. 21 in the Stein Galleries.

“Literature, Religion, Peace: A Conversation with Marilynne Robinson” will be held from 11:15 a.m. to 12:10 p.m. in the Stein Galleries of the Creative Arts Center. The event is free and open to the public.

Robinson’s novels are noted for their mid-20th century Midwest settings and thematic depiction of rural life and faith. The subjects of her essays include the relationship between religion and science, nuclear pollution and contemporary American politics.

Robinson is perhaps best known for her novel “Housekeeping,” which portrays three generations of women and how they keep a spiritual home for themselves and their families in the face of loss; and “Gilead,” the fictional autobiography of an elderly congregationalist pastor in a secluded Iowa town.

“We’re fortunate to be able to bring an author of her standing to the campus and community,” said Carol Loranger, chair of the Department of English Language and Literatures. “Wright State has been a major supporter of the Dayton Literary Peace Prize (DLPP) since its beginnings 11 years ago, and many of our faculty are closely involved with the DLPP organization. That close connection benefits the community and our campus.”

Robinson — the F. Wendell Miller Professor of English and Creative Writing at the Iowa Writers’ Workshop — has received numerous awards, including the Pulitzer Prize for Fiction in 2005, the 2012 National Humanities Medal and the 2016 Library of Congress Prize for American Fiction.

The following exchange occurred in a conversation between Robinson and President Obama in September 2015 in Iowa as reported by The New York Review of Books:

Robinson: I think one of the things that is true is that many Americans on every side of every issue, they think that the worst thing they can say is the truest thing, you know?

The President: No. Tell me what you mean.

Robinson: Well, for example — I mean, I’m a great admirer of American education. And I’ve traveled — I mean, a lot of my essays, you know, are lectures given in educational settings — universities everywhere. And they’re very impressive. They are very much loved by people who identify with them. You meet faculty and they’re very excited about what they’re doing; students that are very excited, and so on.

And then you step away and you hear all this stuff about how the system is failing and we have to pull it limb from limb, and the rest of it. And you think, have you walked through the door? Have you listened to what people say? Have you taught in a foreign university?

Robinson’s visit is sponsored by the Department of English Language and Literatures together with the Peace Lecture Committee; Department of Religion, Philosophy and Classics; the University Honors Program; Department of Art and Art History; and Lake Campus.