You’re strolling down one of Minster’s main streets, start to pass an alleyway, and suddenly it just leaps out at you — a colorful, three-paneled mural depicting the history of the tiny western Ohio village.

The larger-than-life painting is the creation of Katelyn Puthoff, a Wright State University art student who grew up on a Minster-area farm with her seven brothers and sisters.

“We felt putting up the first mural in Minster would be a history-making day, and I wanted a local artist to be able to put their name on this,” said Mary Oldiges, president of the Minster Historical Society and curator of its museum. “I felt she was the perfect person to commission to do this. She captured exactly what we were looking for.”

About a year ago, a Minster resident donated to the museum a three-ton millstone used to grind wheat into flour. It was an artifact that reflected the historic mills that once populated the village. Oldiges decided to use the millstone to begin creating a heritage park and cultural center in an alleyway next to the museum with the help of the Village of Minster. 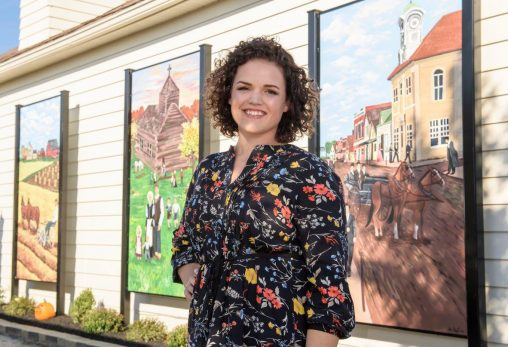 Oldiges’ vision was to festoon the wall of one of the alleyway buildings with plaques honoring historic Minster figures and the other wall with a mural. In April, Puthoff was awarded a $1,200 commission to paint the mural.

Founded in 1832, Minster was mostly comprised of German settlers who brought their farming skills and Catholic faith with them. One of the mural’s panels is a farming scene, and another portrays the village’s original log cabin Catholic church. The third panel depicts the village’s progress, with a street scene from the early 1900s.

“Kate captured three good visions of our past,” said Oldiges. “I think she did a remarkable job.”

Puthoff spent about six weeks painting the mural in the cafeteria of a former school building. It was installed earlier this fall.

“We get a lot of walkers at night in Minster,” said Oldiges. “They’re just mesmerized.”

The latex mural, each panel of which is framed by black metal beams, has two protective coatings of high-grade preservative varnish to resist weathering.

Puthoff admits she was initially surprised at how large the mural panels were — each of them five feet wide and nine feet tall.

“It was very daunting at first; I was kind of overwhelmed. But looking back now, I’m glad I did it,” she said. “I’m realizing how much of a deal it is.”

She initially had no idea of what to paint on the panels. After several brainstorming sessions with Oldiges, the two of them came up with the themes. 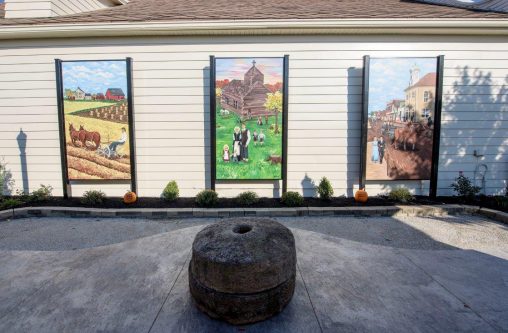 Puthoff has a love affair with Minster. When her family’s house burned down in January 2015, the Puthoffs were showered with love and support in the form of hugs, gifts, money, food and clothing.

“It is a very, very tightknit community,” Puthoff said. “You wave to everyone who is going down the street because you know everyone.”

Puthoff has been interested in art since the first grade. After graduating from Minster High School, she enrolled at Wright State’s Lake Campus and two years later transferred to the Dayton Campus.

“It really has a great art program,” she said. “I couldn’t have asked for a better experience.”

Puthoff has since been commissioned to do a mural for the Dayton branch of the American Red Cross. She expects to complete it in the spring.

Puthoff is also scheduled to graduate with a bachelor’s degree in fine arts in the spring. She wants to go on and earn her master’s, teach art at the college level and have her own art studio.