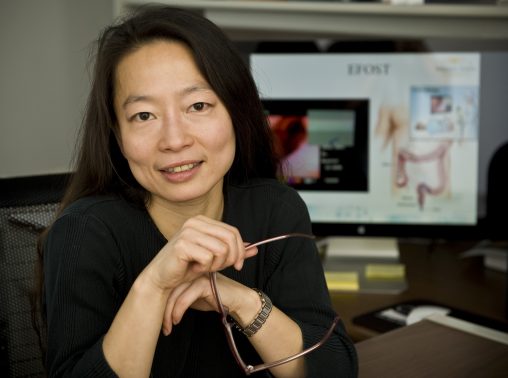 Wright State professor and medical researcher Caroline Cao will spend the spring semester at the International University of Vietnam National Universities as a Fulbright Scholar fellow.

Wright State University professor and medical researcher Caroline Cao, who has done pioneering work in minimally invasive surgery, has been awarded a prestigious Fulbright Scholar fellowship to share her skills and knowledge with college students and faculty in Vietnam.

“I plan to give some public lectures to introduce the subject of human factors engineering and talk about my research in minimally invasive surgery,” said Cao. “I will also work with the faculty and students in the Department of Biomedical Engineering on special projects, including the development of a new program in human factors medical device engineering.”

Cao received the Fulbright U.S. Scholar Program grant from the U.S. Department of State and the J. William Fulbright Foreign Scholarship Board. She is one of more than 1,200 U.S. citizens who will teach, conduct research and provide expertise abroad for the 2016-2017 academic year through the Fulbright U.S. Scholar Program. Recipients of Fulbright awards are selected on the basis of academic and professional achievement as well as record of service and demonstrated leadership in their respective fields. Wright State has had four Fulbright Scholars since 2011, not including students.

Cao is professor of biomedical, industrial and human factors engineering as well as mechanical and materials engineering at the College of Engineering and Computer Science and professor of surgery at the Boonshoft School of Medicine. She was the Ohio Research Scholar for the Ohio Imaging Research and Innovation Network (OIRAIN) from 2012 to 2015 and is an expert in the design and evaluation of enabling technology, such as haptics, navigational aids and surgical simulation, for minimally invasive surgery.

The field of human factors engineering is applying the understanding of human capability in the design and development of technology to improve performance and safety.

Cao headed a team of researchers who invented a revolutionary medical device that could eliminate the need for radiation-emitting X-rays in image-guided minimally invasive surgical procedures. She also headed a research project aimed at improving robotic surgery in hospital operating rooms.

Cao is an expert on the use of imaging techniques, visualization and haptics in training physicians to do minimally invasive surgery. Instead of the traditional method of cutting open the abdomen and manipulating the tissues with the hands or surgical tools, tiny incisions are made, a miniature camera inserted and the operation performed with tiny chopstick-like instruments while watching the camera images. Recovery time for the patients is much faster, with lower rates of infection and decreased pain and suffering.

To train physicians, Cao has helped design surgical training simulators. The simulators make it unnecessary to use and sacrifice animals to practice on or to build expensive inanimate models that resemble tissue. 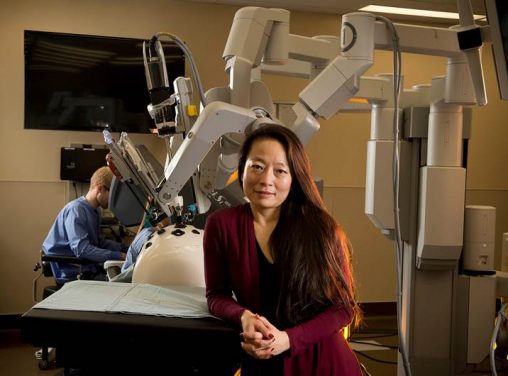 Caroline Cao’s research projects include inventing a revolutionary medical device that could eliminate the need for radiation-emitting X-rays and improving robotic surgery in hospital operating rooms.

The Fulbright international educational exchange program sponsored by the U.S. government is designed to build relations between the people of the United States and the people of other countries that are needed to solve global challenges. It operates in more than 160 countries.

This year marks the 70th anniversary of the program’s establishment in 1946 under legislation introduced by U.S. Senator J. William Fulbright of Arkansas. Since then, the program has given more than 360,000 students, scholars, teachers, artists and scientists the opportunity to study, teach and conduct research, exchange ideas and contribute to finding solutions to shared international concerns.

Fulbrighters address critical global challenges — from sustainable energy and climate change to public health and food security — in all areas, while building relationships, knowledge and leadership in support of the long-term interests of the United States and the world. Fulbright alumni have achieved distinction in many fields, including 54 who have been awarded the Nobel Prize, 82 who have received Pulitzer Prizes and 33 who have served as a head of state or government.

Cao grew up in Vietnam. When she was 10, she and her family slipped away from their home in Saigon and joined the “boat people,” a tidal surge of refugees leaving Communist-controlled Vietnam in vessels of all shapes and sizes following the Vietnam War in the late 1970s.

After spending three months in a refugee camp in the Philippines, Cao and her family arrived at their new home in Vancouver, thanks to the United Nations. They were among the first boat people to come to Canada.

Cao obtained her doctorate at the University of Toronto and then went to Tufts University near Boston, where she was director of the human factors program as well as a faculty member of the mechanical engineering department. She won the prestigious National Science Foundation CAREER award in 2003 and has served as principal investigator or co-principal investigator on more than $15 million of funded research, including multi-institutional grants supported by the National Institutes of Health.

Cao received a research chair in France supported by the Regional Research Council of the Loire Region in France in 2010-2011 and was a distinguished visiting scientist at the Australian E-Health Research Centre at CSIRO (Commonwealth Scientific and Industrial Research Organisation) in Brisbane, Australia, in 2013.