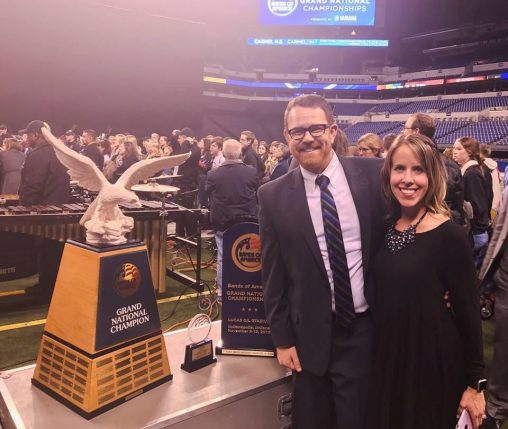 It came down to the wire, and it wasn’t over until it was over.

The Carmel High School and Avon High School marching bands had both finished their performances in the finals of the Bands of America Grand National Championship, the largest and most prestigious marching band event in the land.

The two Indiana bands were tied for first place after the November competition, posting the same score. It essentially came down to impact, with Carmel declared champion because it had the higher overall General Effect score.

“This particular championship was one for the history books,” said Kyle Young, a Wright State University music education graduate and Carmel’s associate director of bands. “This is a significant honor — the most prestigious accomplishment a marching band can achieve.”

For Young, it was the highlight of a still-young career that saw him direct band programs at Fairborn High School and the Mason City School District before arriving at Carmel, a city of about 90,000 just north of Indianapolis.

“This was a once-in-a-lifetime opportunity to teach in a program that I grew up admiring,” said Young.

Young grew up in Fairborn and developed an interest in music at an early age.

“My mother was always playing the piano and singing in the house,” he said, adding that she is still a performing member of the Dayton Philharmonic Chorus. “She took the family to a wide variety of live performances while we were growing up.”

Young’s mother encouraged him to join the band program at Fairborn High.

“It was through my participation in this program that I developed a love and desire to pursue a career in music,” he said.

After graduating in 2001, Young enrolled at Wright State. In high school, he had begun studying with Shelley Jagow, professor of saxophone and music education at the university. 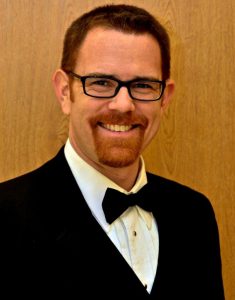 “Dr. Jagow is a renowned saxophone performer, teacher and music educator who travels the world sharing her knowledge and love of music education,” said Young. “It was clear from my time with Dr. Jagow that Wright State was the best fit to pursue my education in music.”

Following graduation in 2005, Young began teaching courses in band, orchestra and general music at Fairborn High and served as the assistant director of the marching band. After one year in Fairborn, he got a teaching position as a band director in Mason.

“I spent the next seven years teaching in Mason and working with an incredible team of band directors building one of the strongest programs in the state and the country,” Young said. “My time at Mason proved to be invaluable, as I learned an incredible amount about how to be an effective and caring teacher as well as developing a well-rounded program.”

In 2013, Young arrived at Carmel, hired as the associate director of bands. He co-conducts six concert bands, directs one of four jazz ensembles and co-directs the basketball pep band. And, of course, he serves as assistant director of the 285-member marching band.

Every season, the marching band has a competition show that is custom designed for them by a team of designers from across the country. The designers try to create a product of the highest level of sophistication while working to achieve the highest levels of performance quality. It is achieved through countless hours of rigorous rehearsals as well as many local and national performances.

The type of music the band performs varies year to year. Most recently, it performed music from such composers as Gustav Mahler of Austria and Russia’s Sergei Rachmaninoff. During the Bands of America Grand National Championship, the band performed the Adagietto movement from Mahler’s Fifth Symphony, the Adagio movement from Rachmaninoff’s Second Symphony, as well as original music composed by Richard Saucedo.

The Bands of America, a division of Music for All, promotes and organizes marching band competitions for high school students. Its Grand National Championships is an annual three-day competition currently held in Lucas Oil Stadium in Indianapolis, with about 100 high school marching bands participating from around the country. More than 50,000 participants and spectators attend the event annually.

The Carmel Marching Band has a long history of success that can be traced back more than 30 years. This year was the band’s 21st consecutive appearance in the Grand National Championship finals and it has been in the top five placing bands for 17 of those years. Carmel was Grand National Champion in 2005, 2012 and now 2016.

The band’s latest accomplishment was a special personal moment for Young. His wife, Kelly, is an instructor with the band and works with the Color Guard program as an instructor and choreographer.

“Being able to share in this momentous occasion together is something that I will always treasure,” Young said.

The band and color guard students have now shifted into their winter and spring seasons, which include concert band, jazz band, Winter Guard and winter percussion.

“And the designers and directors of the marching band have already begun plans for the next competitive season,” Young said.