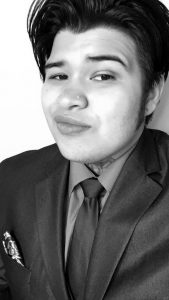 The cataclysmic 1991 eruption of the Mount Pinatubo volcano in the Philippines changed the course of his life.

The second largest volcanic eruption of the 20th century created avalanches of hot ash and gas, giant mudflows and a cloud of volcanic ash hundreds of miles wide. It killed hundreds of people, left 100,000 homeless and sent 1-year-old Jamaica Siroky and his family seeking refuge in the United States, where they settled in South Carolina.

“I come from a background of farmers, fisherman and honest-to-goodness hard-working people,” said Siroky. “Those values have always been ingrained in me ever since I can remember.”

Siroky’s mother emphasized the importance of education and taught her son to read at a very young age.

“My mom works a factory job now and has done that a lot for most of her life in America,” he said. “She has definitely worked herself to the grind for her kids. But it became our own individual responsibilities to always do more and be more than what she ever could be because of circumstance. So I did.”

Siroky got his first taste of drama and theater in the eighth grade after moving to Dayton. He asked his mother to sew him a King George costume so he could get extra credit during a class debate on the American Revolution.

“I had a blast pretending to be royalty,” he said. “From there, I began to check out plays.”

Siroky attended Wayne High School. He graduated fifth in his class, with a 4.3 GPA.

“I always knew how to find and attract people who aligned with my own deterministic attitude, compassion and wanted something more in life and not just being complacent,” he said.

After graduation, Siroky was working to help his family pay bills and tried to convince his mother to let him take a year off to save for college.

“For those who don’t really make enough — or attempt to make it paycheck to paycheck — not having enough to do something is just a constant reminder,” he said, “so I wanted to have some semblance of stability before embarking on college. But my mom told me ‘absolutely not’ — I was going to college whether I liked it or not.”

So Siroky enrolled at Wright State, becoming a first-generation college student. He earned his bachelor’s degree in integrated language arts in 2011 and his master’s in education in 2012.

“I had some amazing professors at Wright State, particularly in the English department,” he said. “They don’t know it, but they affected me in such a way that I couldn’t help but fall more in love with English and education than I already had.”

Because of his creative teaching style, Siroky had a bumpy start at his first two student-teaching jobs, but was ultimately hired at Thurgood Marshall STEM High School.

“Thurgood gave me an opportunity to rebuild my confidence and re-learn why I fell in love with teaching in the first place,” he said. “The teachers make it a point to bring more minority voices into the students’ reading, making sure there is representation and access. I don’t think you will find a Dayton public school more devoted to the consciousness and care of its children than Thurgood.”

“They want to act out stuff with me too as they get transported into my world of English lit and language,” he said.

Siroky also founded the school poetry club and entered it into poetry slams, competitions in which poets read or recite original work.

“I trained my students by introducing them to various genres, doing my own pieces in front of them or being silly and spitting lines out on a whim,” he said. “I was a facilitator/mentor, but I also became quite the learner. We would end up mimicking each other for a different approach until we found the nuances we liked about what each style had to offer.”

This past year, Thurgood Marshall won the district poetry slam as a school.

“Poetry slams teach students about their own voices,” he said. “They slowly piece together the ways in which words fit and flow and the kind of effect their diction and syntax can have on a person’s being. That’s pretty powerful stuff — not only for the performer, but the audience as well.”

Siroky has also gotten his students involved in service-learning, requiring it as part of a senior project.

“Community-building is of the utmost importance, but it takes students wanting to connect and wanting to work for that kind of kinship to foster a sense of growth and belonging that makes them want to help,” he said.

Some students mentored incoming freshmen, others read to pupils in nearby schools, and others helped start community gardens.

Siroky is also site coordinator for the National Conference for Community and Justice of Greater Dayton, a nonprofit devoted to fighting bias and bigotry, especially in education.

He soon plans to move to Boston and has applied to Harvard University’s Ph.D. program in education with a concentration in cultures, institutions and society. He has one more test to take for admittance.

Siroky credits much of his success to his days at Wright State.

“Wright State professors care enough to impart what they know, challenge you to do more than what you think you’re capable of — mainly because they are paying attention to you — and just be people before they are professors,” he said. “I am amazed at our faculty and always proud to say I am an alum of this place.”