Cheryl B. Schrader named next president of Wright State University

Cheryl B. Schrader, chancellor of Missouri University of Science and Technology, was named the next president of Wright State University and will become the first woman to lead the school in its 50-year history.

Schrader emerged from a nine-month national search and a diverse pool of 61 candidates to win selection by the Wright State Board of Trustees to become the university’s seventh president.

She was publicly introduced as Wright State’s next president March 6 after the board approved her election during a meeting in the Student Union Atrium. She will succeed President David R. Hopkins when he retires June 30, 2017.

“This is the right time to be at Wright State,” said Schrader. “The university has built up its potential over the past decade and is poised to move to the next level. And that’s where I would like to be.” 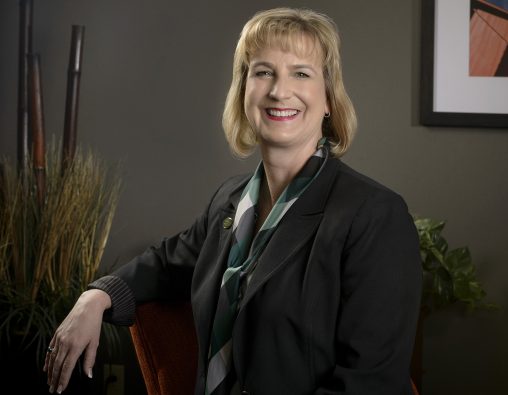 Board Chair Michael C. Bridges said the challenges at Wright State are many and that higher education in Ohio and across the nation is at a crossroads.

“It will take bold leadership to continue to move this great institution forward,” said Bridges. “The board believes Dr. Schrader’s experience as a leader, innovator and educator makes her ideally suited to guide our university as we look ahead to the next 50 years of transforming the lives of our students and the communities we serve.”

Bridges also said Schrader’s extensive research and scholarship background will enable Wright State to strengthen and expand its research mission and connections, something that is essential to the future of the university.

“At the same time, she brings a love of liberal arts, the humanities and athletics to this position,” he said. “That combination will ensure that Wright State grows as a vibrant, comprehensive university highly attractive to students of all interests and backgrounds.”

“The board felt that Cheryl was the best fit for Wright State University,” added board Vice Chair Doug Fecher. “Cheryl’s research background and her ability to meld that with the humanities and the arts is really quite remarkable. We were very impressed with that. We think she will do a great job for our university.” 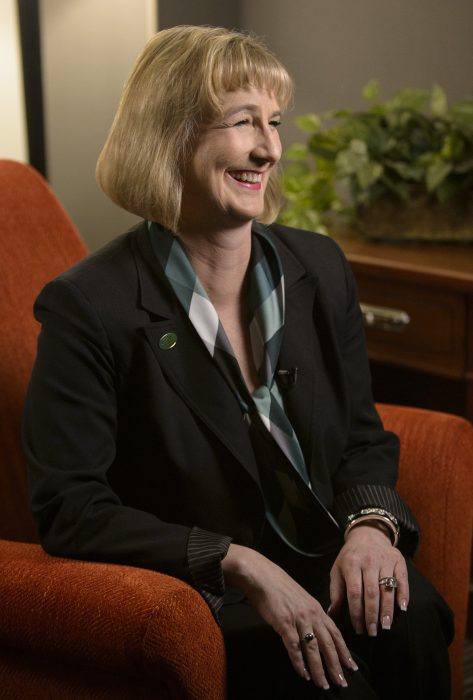 Prior to joining Missouri of Science and Technology in 2012, Cheryl B. Schrader served as associate vice president for strategic research initiatives at Boise State University and dean of the College of Engineering at Boise State. She also held numerous administrative positions at The University of Texas at San Antonio.

She praised the work being done by Wright State faculty and staff.

“I’m very much looking forward to getting to know them,” she said. “We need to celebrate their accomplishments, and we need to do a better job of just lifting up all of the great things that are happening here.”

Schrader said college presidents and chancellors must be resilient and authentic.

“And you need to have that opportunity to embrace the culture and understand the people,” she said. “And that’s what I’m very much looking forward to.”

Schrader was the first woman to serve as chancellor at Missouri S&T — which is 150 years old — when she took the position in 2012.

“I look at it this way,” she said. “Wright State is ahead of the game if you have the first female president in 50 years.”

Schrader grew up in Illinois with a father who was a small-town minister and mother who later became a librarian and office manager. 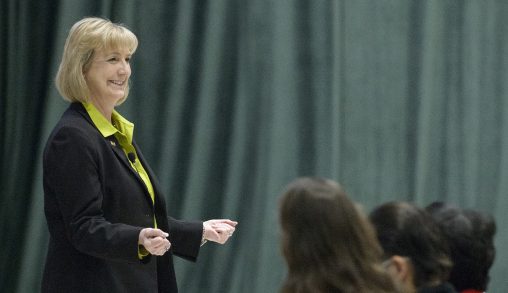 Cheryl B. Schrader talking with students, faculty, staff and community leaders during a public forum at the Lake Campus in February.

Her research background is in the area of systems and control. As a researcher, Schrader has received several best paper awards; written more than 100 publications in the areas of systems and control, robotics and intelligent systems, with biomedical, networking and aircraft applications; and delivered more than 100 presentations and keynote addresses. Her grant and contract funding exceeds $11 million.

Schrader said she already feels a strong connection to Wright State because of her days at Valparaiso, which like Wright State is a member of the Horizon League. Her fondest memory at Valparaiso, she said, was the opportunity to participate in its well-known Honors College, which gave her a base in the liberal arts that helped balance her engineering education.

In addition, she interned at the McDonnell Douglas Astronautics Company in Huntington Beach, California. She is a recipient of the Presidential Award for Excellence in Science, Mathematics and Engineering Mentoring from the White House.

Schrader said she was attracted to Wright State because of her experiences working with the military and health care partners, both of which are Wright State strengths.

“And then as well, the focus on innovation, because universities need to be innovative. We need to think of new ways to do business and we have to be creative in our classrooms and also in our laboratories,” she said.

Schrader said higher education today looks much different than it did when she was a student.

“We are facing a situation where we have more expectations and perhaps fewer resources. So we need to be very creative and innovative in how we do business and how we also interact with the students,” she said. “Students are really our livelihood and that’s why we’re here. So being able to provide them with the best return on the investment that they make in us will require us to be working together as partners.” 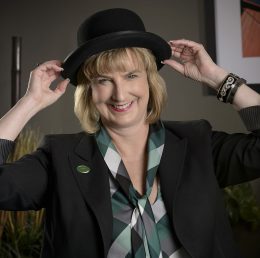 President-designate Schrader says she thrilled, energized and very grateful for the opportunity to become a Raider.

“As I’ve talked about creating an environment that fosters innovation, you do that by bringing in a diversity of thought and a diversity of perspective,” she said. “Certainly, Wright State has been known as a very diverse place and a very accessible place.”

Schrader’s husband, Jeff, served for many years in the legal profession. The couple has a son, Andrew, who is pursuing a Ph.D. in mechanical engineering at Georgia Tech, and a daughter, Ella, who attends elementary school in Rolla, Missouri.

Schrader said she is excited and thrilled to be Wright State’s next president, “with a little healthy nervousness put into that.”

“But certainly I’m energized and very grateful for this opportunity,” she said.