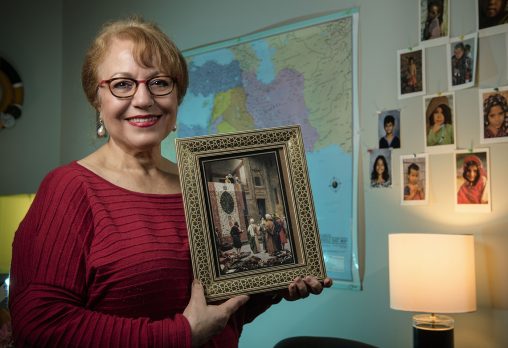 Azadeh Jahanbegloo, a senior lecturer of sociology, is now a U.S. citizen who calls America home, but never got to say goodbye to her past. (Photo by Erin Pence)

Hanging on her office wall in Millett Hall is a painting that depicts a carpet bazaar in 18th century Persia. It’s a reminder for Azadeh Jahanbegloo — a reminder of the joy of growing up in what is now Iran and the pain of realizing that she may never have another chance to go home again.

For the past 30 years, Jahanbegloo has taught sociology at Wright State University. She and her husband left Iran in 1976 to pursue educational opportunities in the United States and then had to remain on U.S. soil following the 1979 revolution that toppled the Shah of Iran and resulted in establishment of the Islamic Republic. A return trip to Iran could have meant prison or death.

And even though Jahanbegloo has been able to safely return to Iran a few times in recent years, she found it vastly changed — a strange, unfamiliar land.

“I’m homesick because I didn’t say goodbye to my past,” she said.

Don’t get Jahanbegloo wrong. She is a U.S. citizen who loves America and calls it home. It’s just that the pangs of the past — her education-minded parents, her thrilling days at the University of Tehran, falling in love with her future husband and doing important social work for those in need — sometimes pull at her heartstrings.

Jahanbegloo was born and grew up in Tehran in a lower middle-class home. Her father was an office worker. Her mother, a strong believer in education and “quite a feminist for her time,” pushed Jahanbegloo to pursue college.

Jahanbegloo won a full scholarship to the University of Tehran, became a first-generation college student in a country in which only the best and the brightest are afforded the privilege of higher education and studied social work.

“I always wanted to find out more about what was going on in society and if there was anything I could do to help people,” she said.

It was while waiting in line for a bus to take her to school that she met Hassan Rahmanian, a fellow university student. Because public displays of affection between members of the opposite sex were frowned upon, the two would meet in the university library and study sitting side by side. Rahmanian would bring rose flowers inscripted with love notes on each individual petal.

“It was quite romantic,” Jahanbegloo recalled. “He couldn’t express himself freely in public.”

The couple became political activists, taking part in student protests against the shah in 1969-70, a very dangerous practice.

After Jahanbegloo received her bachelor’s degree in social work in 1974, she worked as a social worker in Tehran for several years. She had clients in schools, low-income housing projects, juvenile detention centers, prisons and even brothels. She also did rehabilitation work with people with disabilities.

In 1978, Jahanbegloo and her husband — who received a full scholarship to complete his doctoral program in political economy because he was the valedictorian in the master’s program at the University of Tehran — moved to the United States after he was accepted at the University of Pittsburgh.

The couple expected to return to Iran after completing their studies, so they left their native land with just one clothing-filled suitcase. After the revolution in 1979, the new Iranian government terminated her husband’s scholarship.

The couple feared returning to Iran. Some of their friends who did were arrested when they landed at the airport in Tehran. Two others were later executed.

Jahanbegloo’s husband received a teaching fellowship at Pitt, and the couple spent the next nine years in Pittsburgh. They obtained visas, green cards and finally U.S. citizenship.

At Pitt, Jahanbegloo took courses in sociology, mastered English along the way, earned her master’s degree in sociology and nearly complete her Ph.D. After her husband obtained his Ph.D., he got a job at Antioch College in Yellow Springs, Ohio, teaching courses in political economy and management. The couple moved to Ohio in 1986.

That same year, Jahanbegloo joined the faculty at Wright State as an adjunct and over the years also taught at Miami University, Miami-Middletown, Wittenberg University, Clark State Community College, Wilmington College and the prisons in Lebanon and Warren County.

Jahanbegloo is currently a senior lecturer in sociology at Wright State and is teaching Introduction to Sociology.

“Because of my personal experience, I came to realize that how important sociology is in having a clearer understanding of what is going on in societies both locally and globally,” she said. “It gives you tools that enable you to see things through a different lens.”

She said studying sociology also gives students an empathy for other people, an insight into their own lives and behavior, and a better understanding of how they can control their own futures. In addition, she said, it is a good way to acquire knowledge and make informed and smarter decisions in the democratic process.

Jahanbegloo said the U.S. immigration ban executive order, if upheld by the courts, will affect Iranians. And even though she is protected by her U.S. citizenship, it makes her wonder whether she’s not welcomed in America because of her ethnic background.

“Emotionally, it hurts,” she said. “Where is home then? Not Iran. Not America? Then where?”