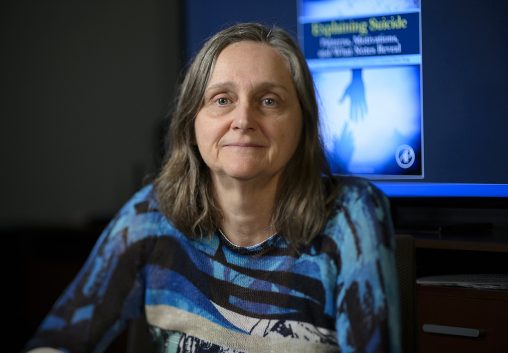 “I don’t know anyone whose life hasn’t been touched by suicide on some level,” said Meyer, who teaches in the School of Professional Psychology. “We really felt like we could make sense of this and maybe help some people. I just want to bring some understanding to suicide or even open a dialogue.”

Suicide deaths have increased astronomically since 1999. As many as 40,000 people kill themselves each year in the United States.

The suicide notes and files of 1,280 suicide victims who died in Montgomery or surrounding counties were turned over to Wright State in 2010 by Ken Betz, director of the Miami Valley Regional Crime Lab, and Lee Lehman and Sheri May of the Montgomery County Coroner’s Office. The trio, who had been collecting the notes since 2000, wanted to know what more could be done to prevent suicides.

Of the 1,280 cases, 14 percent of the victims wrote suicide notes. Meyer read the notes before looking at any of the statistics and instantly knew it was a book.

Many of the notes were written on paper, but others had to be captured by photographs because they were written on towels, mirrors, Christmas cards, coffee filters and even on the victims’ bodies. One man spray-painted a suicide note on the floor of a barn.

One victim, wracked by guilt involving the death of a child, made entries on his calendar for each day of the week preceding his suicide, starting with “maybe” on the first day, several days of “not yet” and “yet” on the day he shot himself in the head.

The victims killed themselves with guns, drugs, carbon monoxide and by hanging, drowning and slashing their wrists. Their bodies were found in homes, garages, a barn, a cemetery, a fraternity house, jail cells, a storage unit, a park, an island, the back of a van and hanging from trees.

Blood spatter stained some of the notes, making them difficult to read. Notes from victims who had been taking drugs became incoherent toward the end. 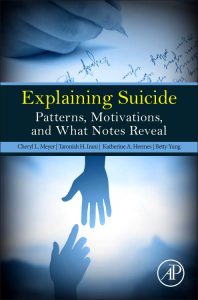 The notes often addressed a specific person. Others were addressed to no one in particular. One person addressed the note to his dog.

“If they had a note, I really felt that I got to know them,” said Meyer. “Going back and reading a note is kind of like visiting an old friend.”

Meyer said it is hard to know why some people leave suicide notes and others don’t.

“It comes down to what the motivation was for the suicide,” she said.

She said some notes are designed to lash out and accuse others of not caring, or to control and manipulate by making them feel guilty. Other notes simply say goodbye to loved ones or absolve them of any guilt.

Of the local note-writers, 70 percent said they committed suicide to escape painful life circumstances such as physical or psychological illness.

“I can’t work and Social Security doesn’t pay enoug (sic) to live on. Ever (sic) day is the same — just looking at a TV scene — watching fantasy and make believe — or seeing other people live an active-fun and fulfilling life with family and friends.”

The biggest single risk factor for suicide was being a white male. Meyer said some males have what is called “hegemonic masculinity,” a hyper masculinity difficult to live up to. When these men fail in something significant in their lives, Meyer said, it can have a devastating psychological impact because they feel they are not real men.

Conflict in interpersonal relationships accounted for 23 percent of the suicides among note-writers, with many notes referring to unrequited or lost love.

Twenty-two percent of notes mentioned precipitating events that drove the writers to commit suicide. Usually these were significant events such as the loss of a job, a distressing medical diagnosis, a financial crisis, a breakup with a spouse or boyfriend/girlfriend or an arrest or impending jail sentence.

“We looked at the connections between legal issues and suicide,” said Meyer. “There is a really strong tie between things like DUIs and killing yourself.”

Many notes were written to reassure survivors that the suicide was not their fault and that there was nothing they could have done to prevent it. Writers of these notes often apologized for the pain that would be caused by their loved one finding them.

About one-third of the note-writers mentioned faith, religion or God in their notes.

“I leave this life with some sadness and grief, but on the other hand, I have a great curiosity to know what’s on the other side. And, I have a faith that tells me that it’s a better place and the loved ones who’ve gone before me will be here to greet me and we’ll be together and be happy. In that regard, I’m looking forward to it.”

The first day of the month held the highest risk for suicide. A greater percentage of women wrote notes than men. And 37 of the 1,280 victims were under the age of 18.

The hardest part of the project for Meyer was thinking about the children who killed themselves or who found the suicide victims. 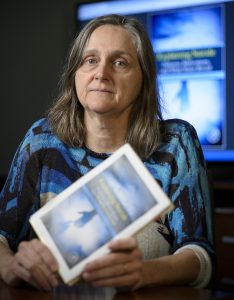 Meyer obtained her Ph.D. in social psychology from Miami University and her law degree from DePaul University. She joined the faculty in Wright State’s School of Professional Psychology in 1997 and specializes in forensic psychology, family violence, correctional psychology and politics and reproductive rights of women.

The book on suicide looks at it through psychological, historical and social science lenses. The target audience includes psychologists, sociologists, social workers, clergy, law enforcement, policymakers, lawyers, corrections personnel, educators, nurses, medical professionals, students, other professionals who work with people whose lives have been influenced by suicide and anyone who has been touched by suicide.

Meyer said people are generally afraid to talk about suicide and that she hopes the book makes them more comfortable speaking with someone who might be suicidal. Suicides are both impulsive and planned, but it only takes a minute, or even a small act or reminder to interrupt one, she said. And limiting or delaying access to guns, pills and other lethal means can prevent them.

Meyer advocates suicide-prevention training modeled on “driver’s ed” courses, which everyone must take to operate a motor vehicle. Trainees would learn how to identify warning signs of suicide, assess the situation and help the person contemplating suicide to seek help. The course should be offered to teenagers in schools, adults in continuing-education forums and elderly people in senior centers and other venues.

A major theme of the book is how to prevent suicide by building resiliency among potential victims, enabling them to better deal with life’s setbacks. Meyer said the best way to do that is to make sure they have social connections and a sense of purpose in life.

Meyer said a national agenda or an action plan for suicide prevention needs to be established. Communities must promote and foster social support systems, healthy lifestyles and the full use of people’s skills and gifts.

“As I sit here in this empty house I realize I am all alone. I don’t have anybody. Nobody loves me; Nobody cares about me. I love you all but you don’t love me.”